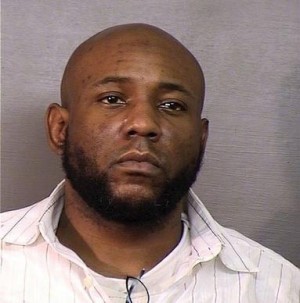 (Updated at 4:40 on 11/9/12) Arlington County Police are on the lookout for a man who they say has been stealing credit cards from gym lockers around north Arlington.

Robert Brockington, 37, is accused of “multiple counts of credit card larceny and credit card fraud.” He is “known to frequent area gyms, and will take wallets and credit cards from both locked and unlocked lockers,” according to police.

The police department is asking anyone with information on Brockington to contact Det. Steven Roeseler at 703-228-4182.

The Arlington County Police Department is asking for the public’s assistance in locating an at-large larceny suspect. Robert Brockington is wanted for multiple counts of credit card larceny and credit card fraud. Brockington is known to steal credit cards from gym lockers at various gyms in North Arlington and uses the cards throughout the region.

Brockington is a 37 year old black male. He is approximately 6’0” tall and weighs 250 lbs. The suspect has a tattoo on the right side of his neck. Brockington is known to frequent area gyms, and will take wallets and credit cards from both locked and unlocked lockers.

In response to questions and requests he has received regarding increasing patrolling since this information was released to the public on Wednesday (November 7), ACPD spokesman Dustin Sternbeck points out that police typically do not patrol private property.