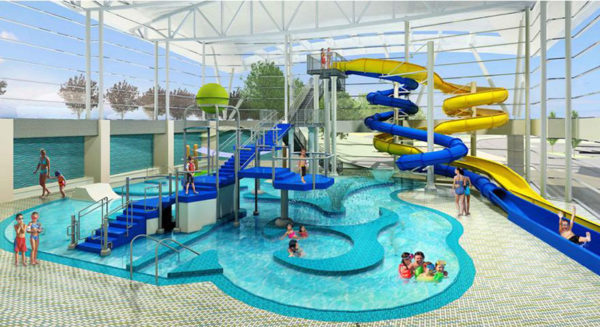 (Updated on 11/19/12) With partial bond funding for the planned Long Bridge Park Aquatics, Health and Fitness Facility approved by Arlington voters, the county is continuing to move forward with the design — and ultimately the construction — of the center.

Located north of Crystal City, just off of I-395, the facility will feature a 50 meter by 25 yard fitness and competition pool, a family leisure pool, a hot water therapy pool, a “teaching pool,” and a “free-form water play area that will… have a lazy river, slides, play features, and a zero-depth ‘beach’ entry.” There will also be an indoor cardiovascular and weight training fitness center, a community use space, child care, locker rooms and, in a planned second phase of construction, an “indoor track, large multi-activity center and various court spaces.”

Renderings, above and below, show the current designs for the facility, which will have its own surface parking lot, accessible via Long Bridge Drive.

The design of the Aquatics, Health and Fitness Facility is expected to be completed in April 2013, according to Arlington County Department of Parks and Recreation planner Erik Beach. The county will then put the project out for bid, with the goal of beginning construction in the early fall of 2013.

All told, the design and construction of the first phase of the center is expected to cost around $80 million, based on figures in the latest Capital Improvement Plan. There is no cost estimate for the second phase of the center, Beach said. Earlier, Beach erroneously quoted a figure of $115.6 million for the design and construction of both phases of the aquatics center, but said on Nov. 19 that his quote included the cost of building Long Bridge Park itself instead of the the second phase of the aquatics center.

Funding for the aquatics center is expected to come from public and private sources, including $42.5 million from this year’s park bond and $20 million from anticipated developer contributions.