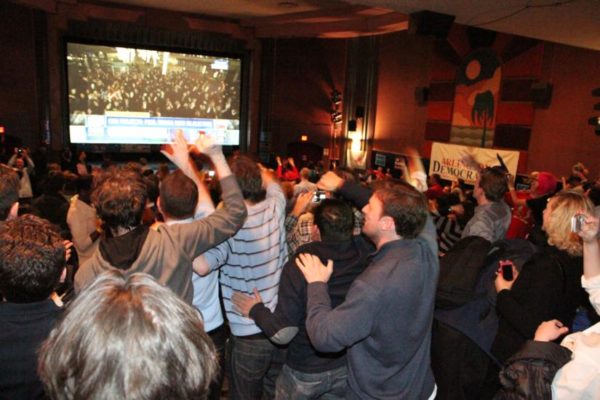 (Updated at 1:25 a.m.) Exuberant local Democrats are celebrating the reelection of President Barack Obama and yet another electoral sweep in Arlington. All local Democratic candidates and ballot questions have emerged victorious in the county.

“It’s a great night to be a Democrat!” reelected County Board member Libby Garvey told an enthusiastic, capacity crowd at the Arlington Cinema Drafthouse on Columbia Pike. Shortly thereafter, the room exploded with jubilation as CNN called the presidential race for Obama. 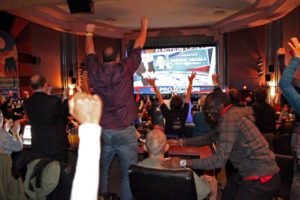 Garvey, an incumbent, defeated Republican Matt Wavro and Green Party candidate Audrey Clement. With all but absentee ballots counted, Garvey has 58 percent of the vote, while Wavro has 28 percent and Clement has 12 percent.

Garvey will now serve a four-year term on the County Board. She first joined the Board following a special election in March. Garvey said her message of independence from the four other Democrats on the County Board — including opposition to the Columbia Pike streetcar — resonated with voters.

Despite losing the race, Wavro said he was encouraged by the response he received while meeting Arlington voters. He said he hopes his campaign helps to encourage more earnest participation in and official consideration of the county’s civic processes.

“I think we’ll see more of an eye towards individuals expecting their public input to be public input and not just a part of a process toward a foregone conclusion,” Wavro said.

Despite a criminal investigation involving his son and former campaign field director, Democratic Rep. Jim Moran has defeated repeat Republican challenger Patrick Murray. Moran has 64 percent of the vote in Virginia’s eighth congressional district, to Murray’s 31 percent. This will be Moran’s 12th term in office. 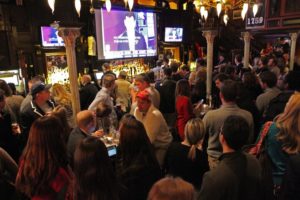 “I just hope that with this 12th election for Jim, that he finally sees it as not a mandate to act and say anything with impunity, but to finally put people over partisanship and do something that is helpful for the country and helpful for the district and not just himself,” Murray told ARLnow.com.

Murray said he was happy with his campaign’s effort but disappointed with the outcome. He conceded that it was an uphill battle from the start.

“We’re in a difficult district that is gerrymandered specifically for Jim Moran. We worked so hard, almost from the end of the last election in 2010, but it is a tough, tough district,” Murray said. The retired Army colonel hinted that he might pursue job opportunities in the private sector instead of preparing for another rematch with Moran.

Voters have said yes to all four Democrat-supported bond referenda. Three — the Metro, schools and community infrastructure bonds — are blowouts, with 73 to more 81 percent of voters saying yes. The results are a bit tighter — about 61 percent in favor to 39 percent against — for a parks bond that contains funding for a proposed $70+ million Long Bridge Park aquatics and fitness center. The center has drawn criticism for its high price tag.

U.S. Senate candidate Tim Kaine (D) defeated Republican George Allen in Arlington by a margin of 68 percent to 31 percent. Statewide, Kaine won 52 percent of the vote to Allen’s 48 percent. The projection for Kaine’s victory was announced earlier to wild applause at the Democratic victory party at the Drafthouse, which spilled over to P. Brennan’s Irish Pub across the street due to capacity issues. Democratic officials estimated a crowd of nearly 650. 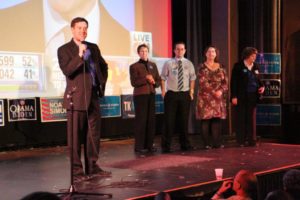 “I think what this says is that Arlington values and appreciates good government,” said Lieberman. “I think Arlington is everything you aspire a community to be: low unemployment, good schools, low crime, good management of the budget. People continue to elect Democrats who deliver that good government as a validation of the job that they’re doing.”

Congressman Moran, in a statement, said this election was a “vindication” for Democrats.

“Tonight was a vindication of the President’s efforts to get our country back on track after the worst recession in our nation’s history,” he said. “Tim Kaine will be our next Senator, a good, decent man who will serve the commonwealth with great distinction. Our nation faces major challenges that demand solutions. We owe it to the American people to come together and work towards reaching the kind of compromise necessary to get the country again moving forward.”

Democrat-affiliated School Board candidates Noah Simon and incumbent Emma Violand-Sanchez, who ran unopposed for two board seats, have both been elected.

With 100 percent of precincts reporting, a total of 117,474 votes were recorded in Arlington in the presidential race. That makes for an 84 percent turnout among the 139,740 active registered voters in the county. Local election officials say they did their best to keep up with the massive turnout at polling stations.

“A large number of Arlingtonians exercised their right to vote today,” said Charlene Bickford, chairman of the Arlington County Electoral Board. “There were some places where the turnout was big enough to cause long lines… In my experience, it was the largest crunch we’ve had in a while.”

Bickford said officials will likely be discussing ways to reduce lines during the next presidential election.

“We’re definitely going to have to look at the number of [voting] machines we have,” she said.