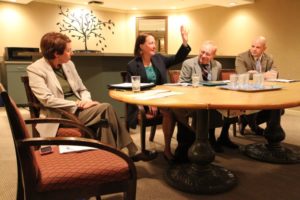 (Updated at 7:45 p.m.) The debate venue was the Radnor / Ft. Myer Heights Civic Association candidates night, held at an apartment building just outside Rosslyn on Tuesday.

Despite the fact that the audience lives north of Route 50, in a neighborhood that has plenty of concerns about traffic, development, aircraft noise and other issues, the main topic of the debate was the Columbia Pike streetcar. The streetcar so dominated the first half of the debate that the moderator had to eventually ask the audience to refrain from asking about it.

It’s ironic, then, that the candidates all essentially agreed with one another. 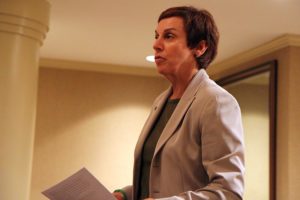 “We need sensible transit,” said Garvey, in her opening remarks. “I have been working deliberately to gather more information about the proposed streetcar and the more I look at it the more convinced I am that what we need is a bus rapid transit system, or BRT. That is by far the best solution for us at this point.”

Wavro also advocated for enhanced bus service along Columbia Pike instead of the streetcar, but he blasted Garvey for abstaining during a vote on the streetcar in July.

“We’ve had studies, more studies, then more studies on the Columbia Pike trolley,” he said. “With that amount of information out there, [Garvey] should be able to make a decision against the trolley.” 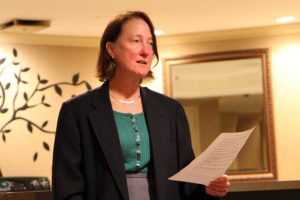 “Board members are elected to take stands on controversial issues, not back away from them,” she said, adding that the streetcar will absorb tax dollars that could be used for capital improvements to Arlington’s existing transportation network and service enhancements like expanded weekend ART bus service.

There was disagreement over whether the Pike streetcar is a decision that can be reversed or not. Wavro argued that a lone board member would and should not be able to reverse the community process that led to the streetcar vote this summer. Garvey said the board only approved a “transit system” and that the “vehicle” for that system is a decision that will be made “down the line.”

“I think this will probably be the most important vote that I’m going to take in my time on the Board, and I’m hoping to be on the Board for about 12 years,” she said.

In addition to speaking out about the Columbia Pike streetcar, Clement also criticized Garvey’s vote to approve the Columbia Pike Neighborhoods Area Plan, which she said will eliminate affordable housing and “will transform the Pike into a gentrified urban canyon.” Wavro, meanwhile, spoke of the need to preserve market rate affordable housing — housing that’s affordable without government intervention — along the Pike and throughout the county. 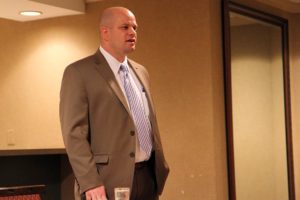 Wavro made fiscal responsibility a pillar of his platform, saying the Board shouldn’t need to raise property tax rates — like it did this spring — on top of increases in property assessments.

“We should be able to fund our priorities through the increased assessments,” he said. “What we’ve seen from the County Board… is a trajectory of spending on capital projects that includes a tax or rent increase for every Arlington resident each year for the next ten years in order to maintain our AAA bond rating. I think we should have a much more responsible capital spending plan.”

Clement again agreed with Wavro, but delivered a sharper attack on Garvey and the Democrat-controlled County Board.

“In the current uncertain financial climate spurred by BRAC closures and the federal deficit, I view spending for key products in the [Capital Improvement Plan], including the [Long Bridge Park] aquatic center and the trolley, as reckless and irresponsible, and will oppose them unless the county’s economic outlook improves” she said. “In addition to opposing profligate capital spending, I have a specific plan for action to promote fiscal responsibility that emphasizes funding basic needs and investment in sustainable infrastructure.”

If elected, Clement pledged to oppose any tax rate increase and to try to repeal this year’s tax increase. Clement, along with Wavro, also proposed the hiring of an independent inspector general to audit and analyze the county’s budget.

Garvey, for her part, also promised a degree of fiscal responsibility.

“We need to set our priorities strategically,” she said. “This is a very privileged community that’s used to having a lot… [but] we cannot do everything. We need to focus on core services, schools, transit, education and a strong social safety net.”

Garvey questioned the decision to fund the Artisphere in Rosslyn the same year the County Board declined to raise police pay, and questioned the need to keep building new theaters.

“I’m thinking maybe we have enough black box theaters,” she said. “I’m not against theaters, I love theater, but our schools have theaters.”

She said Arlington is facing challenges that will require “strong leadership.”

“Things are changing,” she said. “Every year it’s more expensive to live here. Meanwhile, the federal government — a mainstay of our economy — is shrinking. And all around us our neighbors are working on their own smart growth policies. Soon Tysons will have its own Metro line. In short we’re starting to lose our competitive advantage.”

On the topic of traffic, Wavro skewered the county’s practice of reconfiguring streets to make them narrower. The goal of such “road diets,” in his view, is to “make it more frustrating for people [who] drive their cars.”

Wavro said the county should be focused on making forms of transportation more convenient.

“The number one thing is getting people where they need to go in the least amount of time,” he said. “People in Arlington have important things to do and of course places to go, and we ought to help them get there as County Board members.”

Clement said she supports greater investment in transportation and transit, but not in streetcar systems. She also suggested that there’s a limit to how “car free” Arlington could be.

“I’m extremely cynical of other county’s citizens, in so far as I don’t think they want to get out of their cars,” she said. “But I don’t hold the same view of Arlington residents. I do believe Arlington residents are ready for mass transit, but it’s not there yet and the Pike trolley will make it even more difficult to get there.”

In response to the question about traffic, Garvey again reiterated her support for a bus rapid transit system, and floated the idea of a regional BRT system — and that stemmed, she said, from conversations with the leaders of other local jurisdictions, like Montgomery County and Fairfax County.

Later in the debate, Clement made the case for more citizen involvement with county decisions. She cited the case of Tuckahoe Elementary School parents who were upset about a plan to place trailers on the school’s blacktop, but failed to show up at a County Board meeting to voice their concerns.

“Stop being uncritical of the County Board,” she said. “If County Board doesn’t hear your concerns, obviously they’re not going to do anything about it.”