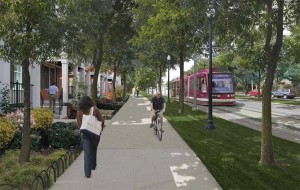 The County Board decided to approve the Columbia Pike Neighborhoods Area Plan during a meeting Monday night that stretched into the early hours this morning. The large scale plan aims to transform Columbia Pike into a more urban and walkable community, while maintaining affordable housing over the next 30 years.

The plan involves increasing density along the Pike — as many as 14,800 new apartments and condo units over the next 30 years — partially through allowing the construction of taller buildings. It also includes retaining approximately 4,500 affordable housing units, with all of them available at 60 percent of the Area Median Income (AMI). Those units are privately owned and operated, with the possibility of the county providing incentives for property owners. It also calls for the county, over the next 30 years, to develop 2,150 new rental units along the Pike that will be contractually committed to remain affordable.

“This is the most ambitious set of actions the county has ever adopted for preserving affordable housing as part of an area plan,” said Arlington County Board Chair Mary Hynes. “Our experience has taught us that if we do not plan for affordable housing from the outset, rising property values make maintaining our diversity in housing choices and rents very difficult.”

For about three hours, 47 residents addressed the Board, both in favor of and against the proposal. The Board spent an additional two hours debating various aspects of the overall plan, such as the amount of affordable housing and how to fund it.

Much debate ensued over the issue of how much affordable housing developers should be required to provide, using Form Based Code to increase density and receive incentives. County staff had recommended 20-25 percent of net new development be reserved for affordable housing. The Board voted in favor of increasing the number up to 35 percent.

Financing the preservation of affordable housing through means such as a tax increment finacing area (TIF) split the Board. Members Chris Zimmerman and Walter Tejada supported the idea of a TIF, which would give 50 percent of revenue from increased commercial property assessments along Columbia Pike back to affordable housing initiatives in the area.

Zimmerman said a TIF would ensure some value goes back to the community to help mitigate any harm the development plan would cause. He also noted that the Affordable Housing Investment Fund (AHIF) would need more funding — an additional $200 million over 30 years, according to county staff — to meet the county’s goals. He believes a TIF would be an appropriate way to boost the fund.

“The fact of the matter is, we don’t have enough money going into AHIF now on an annual basis to meet the goals the county has set. There’s no way that we’re going to get what we need entirely, or probably not even mostly, out of new development,” Zimmerman said. “If we’re going to be serious about achieving the goal here, we have to do a lot more.”

Board member Jay Fisette said the TIF proposal was thrown at him just hours before the meeting. He said it is currently too unexplored and the Board hadn’t been given enough time to examine the concept.

“I cannot support this today. I don’t think it was expected that this was going to be part of the action today,” said Fisette.

Hynes agreed, saying there may be alternate ways to boost the AHIF.

“I do support making regular increases, progressive increases, in the AHIF fund,” said Hynes. “In my view, we’re just not ready to do it this way.” 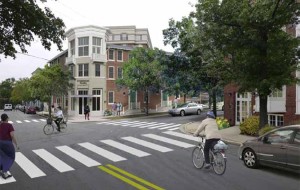 Tejada clarified that the TIF would not be an additional tax, but would come from the extra money generated by the proposed higher density. He said it’s important if the county wants to ensure the future of small businesses on the Pike.

“Currently we have a lot of businesses in the Columbia Pike area that are very nervous whether they’re going to be able to stay there,” said Tejada. “It’s up to us to act now to protect them.”

In the end, the TIF proposal was struck down by a 3-2 vote. Following that vote, the Board approved a motion to study a TIF in the future.

Later in the night, the Board approved another aspect of the long term plan for the Pike — the construction of a streetcar.