(Updated at 8:55 a.m.) The Arlington County Board voted early this morning to approve the streetcar as the preferred transit option for Columbia Pike.

“I do not believe in the trolley because I just don’t think we have the money,” said resident Paulette Gray. “When you lose your income you don’t keep the cable and you don’t build the big addition.”

Other streetcar opponents said bus service would be more reliable, since it doesn’t rely on rails that could be blocked by accidents or electricity that would get cut off during storms.

“Can’t we come up with something much more inventive for our transportation, other than a trolley?” asked resident Antonios Perros, who recounted how streetcars in D.C. in the 1950s would get stranded during big storms. “It just doesn’t seem feasible that we should have a trolley in the 21st century.”

Other speakers, including residents, real estate developers, business boosters, and county transportation committee members, stated their support for the streetcar, saying it would bring needed development and revitalization to the Columbia Pike corridor.

“We think it is critical to expand Arlington’s core transit options for the future,” said Mitch Bonanno, an executive with Vornado/Charles E. Smith. 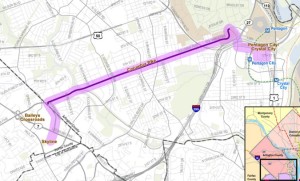 “Small businesses [along Columbia Pike] feel that what they are lacking today is enough customer traffic,” said Columbia Pike Revitalization Organization Executive Director Takis Karantonis, who argued the streetcar would bring additional restaurant and retail customers to the Pike.

In addition to the development potential of fixed rail infrastructure, other arguments for the streetcar include increased travel capacity, ease of boarding, and the regional connectivity to Fairfax County. The Pike streetcar line is expected to extend five miles from the Skyline area of Fairfax County in the west to the Pentagon City Metro station in the east.

“It is clear that the County Board’s goal here is not to put efficient transit on the Pike, your goal is to completely and massively redevelop the Pike,” said perennial county government critic Jim Hurysz.

“News flash folks, we could CUT commercial property taxes to invigorate the local economy rather than pay for a trolley,” said former Republican County Board candidate Mark Kelly, on Twitter.

By our count, there were 11 speakers in favor of the streetcar, and 12 against. The speeches went into the early morning hours, and the Board’s ultimate vote on the matter didn’t take place until around 1:30 a.m. 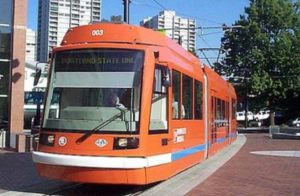 The Board voted 4-0 in favor of the streetcar. Libby Garvey, who’s been on the Board for about 4 months following a special election earlier this year, abstained. In announcing her abstention — saying she “didn’t have enough time” to fully consider the matter — Garvey stated she had significant reservations about the streetcar.

“I cannot see how a streetcar is anything more than a bus with tracks and overhead wires,” she said. “At the moment my common sense is telling me modern bus transit systems are actually better.”

In the end, other Board members disagreed, and voted essentially the same way they did in 2006, when the Board first approved a streetcar system for Columbia Pike.

“I see the… streetcar as the next generation of a regional rail system,” said Jay Fisette. “To me this is an investment.”

The streetcar project is expected to cost $250 million. Of those costs, Arlington County will be responsible for 80 percent, while Fairfax County will be on the hook for 20 percent. Of Arlington’s share, officials are hoping successful grant applications will result in 30 percent being paid for by the federal government, with another 14 percent being paid by the state. Arlington County commercial and industrial taxpayers are expected to pay 56 percent of the costs.

Annual operating costs are estimated at between $22 and $26 million.

County staff said the cost of the streetcar line could be recouped via additional tax revenues attributable to streetcar-fueled development along the Pike. A “conservative estimate” of the tax boost suggests the county could collect $291 million in additional revenue over 30 years.

The Board’s vote — to accept an Alternatives Analysis and Environmental Assessment and adopt the streetcar as the preferred alternative — will pave the way for the County Manager to apply for federal New Starts/Small Starts transit funding. The application process is expected to begin in September.

Before considering the streetcar, the Board approved the sweeping Columbia Pike Neighborhoods Area Plan, which is expected to bring more development and affordable housing to the Columbia Pike corridor.