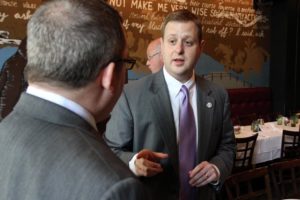 Hope was recently appointed to Gov. Bob McDonnell’s Task Force on School and Campus Safety, which was created in the wake of the Sandy Hook Elementary School shooting. The task force has been charged with making recommendations regarding improvements to school safety practices at K-12 schools and at colleges and universities. Such improvements may include expanded use of school resource officers or security guards, new state or local programs or policies, and improvements to Virginia’s mental health system.

From 7:00 to 8:30 p.m. on Wednesday, interested parents, students and residents are invited to discuss school safety with Del. Hope at the Wakefield High School auditorium (4901 S. Chesterfield Road). Hope will give an update about the work of the task force and listen to concerns and recommendations from the audience.

Hope said the discussion will be wide-ranging, and may incorporate topics beyond the scope of the task force. For instance, the task force was not charged with making recommendation regarding firearm policies, but Hope said guns may still be discussed.

Hope said he will likely hold at least one more town hall meeting before the task force concludes its work this summer. The task force’s relatively short time frame, he said, is the reason the controversial topic of gun control was not included in its agenda.