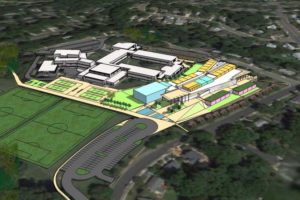 Parents of Arlington youth soccer players and residents who live near Williamsburg Middle School have created dueling petitions — for and against a proposal to install lighting and new soccer fields at the school.

The field and lighting proposal was floated as an optional part of the Arlington Public Schools plan to build a new elementary school on the Williamsburg Middle School campus. The design of the school was approved in February and construction is expected to begin next year.

The proposal involves the construction of two synthetic turf fields next to the school, with lighting installed for the field farthest from the surrounding neighborhood. Arlington Public Schools spokesman Frank Bellavia says the school system currently doesn’t have the money necessary for the synthetic fields and lighting — about $2 million — so supporters are hoping to convince Arlington County to pay for the project.

A group of neighbors, however, has created a Change.org petition calling for the County Board to nix the field lighting component.

“We, as registered voters in Arlington County, strongly oppose the installation of sport field lighting on any of the soccer fields on the Williamsburg Middle/Elementary school property,” the petition says. “The neighborhood surrounding Williamsburg will be heavily impacted by evening traffic, light intrusion, noise and parking impacts.”

So far, the neighbors’ petition has attracted 125 online signatures.

The Arlington Soccer Association, meanwhile, has created its own Change.org petition, which has gathered 1,085 signatures so far. The association says the fields, and the lighting, will help meet growing demand for youth soccer in Arlington.

“We, the undersigned, support placing a lighted synthetic rectangular athletic field on the grounds of Williamsburg Middle School,” the petition says. “The Arlington Department of Parks and Recreation estimates that a lighted synthetic field can sustain five times the overall use of an unlighted grass field.”

“We are sensitive to the concerns of the local community,” the petition continues. “We believe that a lighted field at WMS should be limited to youth sports programming and have a curfew of 9:30 p.m.”

The fight is similar to the acrimonious battle over lighting proposed for the Bishop O’Connell High School baseball and football fields. After nearly 75 speakers weighed in on the O’Connell lighting proposal at a County Board meeting in 2011, the Board rejected the plan,

Before any possible County Board consideration, the Arlington Soccer Association is hoping to convince neighbors that a lighted field will not result in the light pollution, noise and traffic that many fear. The group wrote the following letter (after the jump) as a response to concerns expressed on the email listserv of a local civic association.

When discussions about sports fields and the lighting of sports fields come up, certain topics usually arise. With regard to the development of fields supporting the school development at Williamsburg, here are some of those topics and responses from the Arlington Soccer Association (ASA) for your consideration.

Generally, sports field lighting is opposed by local communities due to the notion that lighting = nighttime use of the fields = noise and bother for the local community. The phrase “property values will decrease” is often thrown around as if lighting is a de facto property value depressant. There may be cases where that is true, especially those with no special considerations in place to protect the local community. Arlington Soccer believes that, with proper controls in place, lighting one of the new fields at Williamsburg will have a positive, not negative, effect on the local community. ASA suspects that, as is the case near Washington-Lee and Yorktown high schools (where fields support nighttime youth and adult sports activities), property values in the Williamsburg school area will be supported and likely will rise while the residents’ quality of life will also improve.

First, Arlington Soccer recommends that the programmed use of the fields at Williamsburg be limited to youth sports groups; no adult groups should be programmed there. Related to this point is the recommendation that field use be cut off at 9:30pm. Most lighted fields in Arlington are open until 11pm and are used heavily in the later hours by adult sports groups. These considerations are suggested to help the local community maintain its quality of life while managing to address field use needs for a variety of youth sports groups.

Second, while two sports fields are planned for in the new school’s plans, ASA proposes that only one field be lighted. The field closest to 36th Street should not be lighted, whereas the one further from the street should be. Houses on 36th Street would be about 100 yards away from the lighted field. Using current lighting technologies, the lighting from a centrally placed field will visually impact few if any houses given the distance from homes in the area.

Third, a major concern shared by residents centers on parking by sports users. The new school site addresses this by adding a new parking lot near 36th Street on the site of a current playing field. This will remove cars and related noise from the street itself, and it will create distance between parkers and homeowners. Most if not all nighttime sports participants will use the parking lot, not the local streets, and that helps relocate any noise or trash factor away from houses in the community.

Fourth, a continual concern voiced by ASA parents is the relative lack of synthetic turf fields in North Arlington. We would be ecstatic if new locations for fields were available for development — but in North Arlington, they simply don’t exist. Development of the Williamsburg fields with artificial turf supports North Arlington residents, both those involved in programmed sports as well as those interested in more casual access to useful play spaces.

Given the student population increase expected when both the new elementary school is completed, as well as the projected enhancement to the middle school (together totaling about 900 more students), it is clear that any field space will be heavily used by the students. Natural grass fields won’t survive that kind of intense use, so the installation of synthetic turf fields means that the traffic will be sustainable, and the neighborhood will likely find such fields to be a desirable amenity to have nearby (more so than a muddy or dusty plot). Historically, Arlington County has always paired lights and turf fields in order to maximize the usage and thus the benefits of turfing fields. ASA feels that taking a more moderate approach by lighting just one field addresses the local community’s concerns while still supporting the County and local youth sports groups, all of which are growing at a steady rate. ASA believes that lighting one field at Williamsburg addresses Arlington field capacity issues while maintaining or even improving the quality of life for the local community. A win-win can be created during the development of the new school site and surroundings.

The arguments are unlikely to sway some neighbors, who vehemently oppose any lighting — including lighting technology specifically designed to prevent light pollution.

“The issue is the encroachment of field lights, traffic and noise upon our peaceful, lovely neighborhood,” one resident wrote the following on a local listserv earlier this month. “‘Dark Sky’ lighting technology, promoted by the Parks Department, will not mitigate these encroachments.”

“If these fields are lighted, against the wishes of our Civic Association and the neighborhood, a precedent may be set that may give Bishop O’Connell High School an opportunity to have lights installed on their field, within the Williamsburg Civic Association,” the resident continued. “If you do not act, the fields are likely to be have lights, and the peace of our evenings in this neighborhood will be shattered by traffic and noise until late evening hours, year round, and your property values along N. 36th Street will be altered.”

Arlington County Dept. of Parks and Recreation spokeswoman Susan Kalish says no decision has been made about the synthetic field proposal. The current plan, she said, is for the school system to reconstruct two existing athletic fields at Williamsburg — which will be impacted by the school construction — in the same format, using natural grass turf.

“County Board Members have raised the idea of installing synthetic turf on these fields and the community has been discussing turf options,” Kalish said. “County staff have not yet made a recommendation as to what type of turf to install on the fields, or if the fields should be lit… we are still in early stages.”

Williamsburg Middle School is located within the bounds of the Rock Spring Civic Association.