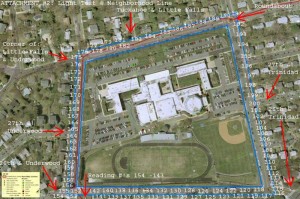 The County Board has rejected a controversial proposal to add lights to the football and basefall fields at Bishop O’Connell High School.

The board’s 3-1 vote to reject the proposal came after nearly 75 speakers — including neighbors, student athletes, nuns and local gadflies — spoke both strongly in favor and strongly against the O’Connell lighting plan.

(Board member Barbara Favola recused herself due to her work for Marymount University. The lighting proposal called for Marymount’s athletic teams to be granted partial use of the fields.)

The nearly three hours of public comment produced a bit of consensus — that Bishop O’Connell was generally a good neighbor and that its plan to renovate the athletic fields themselves was more or less acceptable to the East Falls Church and Williamsburg communities. Otherwise, the two sides were at loggerheads with little hope of an acceptable compromise.

Sister Bernadette McManigal, superintendent of schools for the Diocese of Arlington, asked that Bishop O’Connell be granted the same privileges as Arlington’s public high schools, which have field lights in “neighborhoods comparable to O’Connell.”

“I ask for the same consideration,” she said. Many of the O’Connell student athletes who spoke last night made the same plea — that they wanted the same level of facilities as their public school peers.

In fact, the school argued that its proposed facilities were more modest than the athletic facilities at other Arlington high schools, and insisted that it was being careful to minimize neighborhood impact.

But one resident said that O’Connell’s proposal would have negative effects not experienced in other neighborhoods, according to a lighting consultant hired by neighbors.

“The school’s current design will result in light spillage far in excess of national standards,” said John Seymour, who identified himself as a 20-year resident of the neighborhood. “The spill will significantly impair the lives of neighbors subject to it. It will also impair the values of their homes.”

The home value argument was echoed by many opposed to the plan. There was no definitive word from county staff on whether property values would actually be impacted, although County Manager Barbara Donnellan said there was little evidence that property values were hurt by lighting at Arlington’s public high school.

Donnellan had recommended that the County Board defer consideration of the proposal for three months, since Bishop O’Connell had failed to submit traffic and lighting studies to the county on time. Without the studies, county staff had little to say regarding the proposal. Nonetheless, the board proceed with a vote and rejected the proposal by a vote of 3-1.

Jay Fisette was the lone dissenting board member, saying that he wanted to defer consideration for even longer than Donnellan’s recommendation.

“I think this is half-baked,” Fisette said of the lack of staff analysis before the board.

Bill Adair, a leading opponent of the lighting plan who created a blog about the plan called “No Adverse Impact,” said that he was grateful to the County Board for hearing neighbor complaints about the plan.

“We love living in Arlington,” said Adair, who’s the editor of PoliFact, a national political fact-checking web site. “We love the county government. We’re especially appreciative of the ‘Arlington Way.'”

Bishop O’Connell will be able to re-apply for lighting in 12 months.