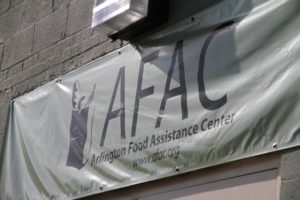 The Arlington Food Assistance Center is low on cereal, pasta, peanut butter and other food items.

AFAC volunteer coordinator Laura Jackson said the end of the summer is typically when its dry food stores are lowest because the center doesn’t conduct as many food drives while people are on vacation.

“It happens most summers,” she said. “We get a lot of produce donations from farmer’s markets during the summer, but a tomato is not the same thing as cereal.”

Other items AFAC is looking for donations are low-sodium soup, canned tuna in water, small bags of flour and cooking oils in plastic bottles.

The center is participating in the nationwide Hunger Action Month, with several events planned around Arlington to collect food and donations. The biggest event, Jackson said, is the Fill the Bus campaign the weekend of Sept. 27-29 at the Giant supermarket at 3115 Lee Highway. AFAC hopes to collect 20,000 pounds of food to fill an ART bus.

There are numerous food drives and even a screening of a movie among the other events planned for Hunger Action Month. More information on donating money or food to AFAC can be found on the organization’s web site.