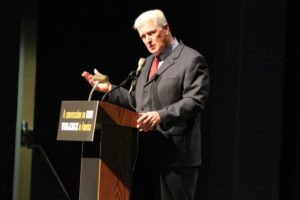 Not taking military action against Syria would weaken the Obama presidency and would diminish America’s place in the world, says Rep. Jim Moran (D-Va.).

The congressman, who opposed the 2003 invasion of Iraq and the military surge in Afghanistan, strongly supports a “surgical strike” against Syria’s chemical weapons capabilities. The Syrian government, which is battling rebel forces, is accused of killing nearly 1,500 civilians in a chemical attack outside Damascus.

President Obama has called on Congress to authorize a military strike, but public support is still thin and congressional authorization is in doubt. Moran blamed former President Bush and the Iraq war for the lack of American public support and the recent vote by the British Parliament against military intervention in Syria.

“I was adamantly opposed to the invasion of Iraq because I knew that the information being presented was specious… we were cherry picking information to reach a conclusion that the administration had already come to,” Moran told ARLnow.com Tuesday afternoon. “What’s happening today, the vote by the British Parliament and the reluctance of the American people to respond to what [Syrian President Bashar] al-Assad is doing in Syria is a direct legacy of the Iraq war… the fact that the world was deliberately misled by the Bush administration to go into a war of choice.”

On Syria, however, Moran is convinced.

“The evidence is irrefutable, that the Assad regime used chemical weapons against innocent people,” he said. “There’s no question in my mind about the verifiability of that information.”

While supportive of the president and his call for military action, Moran said he would have preferred the president use his authority as Commander-in-Chief to strike Syria without congressional approval.

“I feel strongly that President Obama was right to draw a red line against weapons of mass destruction,” he said. “I’d like to see the president to follow through on his original instincts to execute a surgical strike against the capability of Assad’s military to ever use chemical weapons again.”

“Of course he should have” authorized airstrikes, Moran continued. “It’s what Reagan did and what Clinton did. I think that if the vote were held today, it would lose. That’s why the president was wrong to leave the credibility of the United States and the viability of his presidency in the hands of the most dysfunctional Congress in modern history.”

At length, Moran made the case that the United States has a moral obligation to respond to the chemical attacks in Syria.

In my view, this is very much a fundamental, moral issue. As far as I’m concerned, we have a responsibility to promote peace. To not respond to such a massive use of chemical weapons sends a message to North Korea and to Iran and to other would-be dictators that we’re going to tolerate this kind of behavior

I think that history is made by the choices we make that are most difficult. There’s a natural human tendency to stay within our comfort zone. I think a lot of members [of Congress] and their constituents would like to stay within their comfort zone in the United States and let the rest of the world make whatever decisions they choose to make. But this is a much smaller planet than we would like to acknowledge, and the rest of the world looks to the United States to lead, preferably by example. If we don’t lead, I’m afraid there will be a dissolution of resolve to mold a world that will be a better world for future generations.

We either move forward or we regress. If we say something then don’t do what we say we’re going to do, it’s not as though things will stay static. the president is going to be be severely weakened for the rest of his presidency. More importantly, America will be diminished in the eyes of the rest of the world.

Moran clarified that he only supports limited military involvement in Syria.

“What’s being contemplated isn’t a boots on the ground war, but a timely surgical strike to send a message to the rest of the world that America will not tolerate WMDs becoming the new norm for war,” he said. “I wouldn’t support boots on the ground entry into that war. This is not about winning a war against Assad. The action being contemplated is only about stopping the abuse and proliferation of weapons of mass destruction.”

“We have a responsibility to lead,” he concluded. “It’s not an option.”