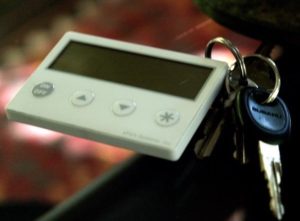 Drivers who use the iPark devices to pay for parking in Arlington will no longer be able to refill them.

The manufacturer, ePark Systems, declared bankruptcy Tuesday, Arlington Chief Deputy Treasurer Carla de la Pava said, notifying the county of the impending bankruptcy at about 1:00 that morning. Funds that are still on the devices can still be used, but refills cannot be processed.

The county first stopped selling the iParks in January 2011 when ePark Systems stopped manufacturing them due to financial troubles, but started selling the devices again nine months later when the company had “recapitalized,” Treasurer Frank O’Leary said at the time.

About a year ago, de la Pava said, the county once again ceased the sale of the small, white devices that hang from rearview mirrors. There are approximately 1,200 devices that have been refilled in the past year, de la Pava said. O’Leary told ARLnow.com that about 4,000 devices are currently “in circulation.” When the office is able to compile a list of current users, it will begin notifying customers of the service’s termination.

O’Leary said the county is in talks with a company, OTI America, about using their in-vehicle personal parking meter technology. OTI’s device would be similar to the iPark, but would be capable of having funds refilled online, whereas the iPark could only be refilled at the Treasurer’s Office.

“It’s only a matter of weeks, not months,” before a deal with OTI could be in place, O’Leary said. He added that the county had been talking to OTI before the ePark bankruptcy.

“We hadn’t anticipated that they’d collapse this quickly,” he explained.

Until a new system is in place, iPark devices that run out of funds will no longer be usable, and those used to pressing a button or two will need to use change or credit cards at the parking meter.