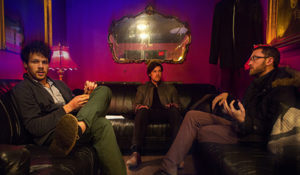 A local band, with the help of collaborators, will perform for eight hours straight at Artisphere tomorrow to promote its new EP release.

Bella Russia, based in D.C., will perform Sept. 7 from noon to 8:00 p.m. in Artisphere’s Black Box Theatre, at 1101 Wilson Blvd. The band is releasing its new EP, “Epaulet,” Saturday and — once the marathon concert is over — hosting a release party from 8:00 to 11:00 p.m. with performances by other artists and a cash bar.

Visitors will be able to watch the performance from a viewing window above the theater and will only allowed to enter the theater during the afterparty. The Sea Life and Janel and Anthony will be performing during the release party.

“With a live show consisting of manic instrument changes, unexpected arrangements, and blistering instrumentation, D.C.-based Bella Russia falls somewhere between rhythmic avant-indie and progressive instrumental,” according to The Pink Line Project‘s announcement of the event. “On stage, the band layers and builds their driving and occasionally nerdy compositions into sounds that at times seem too impossibly complex to be coming from a trio.”