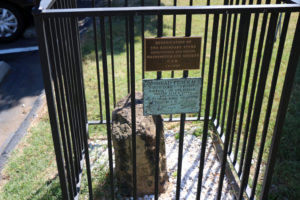 In 10 spots along the outskirts of Arlington, there sit 10 chunks of sandstone enclosed by a small black perimeter fence.

They lie in backyards, parking lots, even in the median of a street in South Arlington. Thousands of people walk or drive by them every day, most of whom are likely not aware of their significance or place in local and national history.

They are the Nation’s Capital Boundary Stones, placed as a result of the Residence Act of 1790. There are 40 stones, one each mile of the original square boundary of Washington, D.C., then called Federal City.

Some of the stones are all but gone, some have been moved to accommodate road and building construction and others have been stolen or lost, according to the Nation’s Capital Boundary Stones Committee’s Boundarystones.org site. All 10 stones within Arlington’s limits are authentic originals. They are at the following locations: 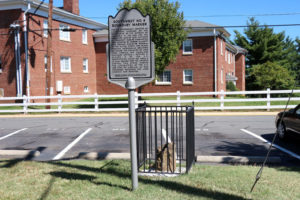 Ramon Perez has been the property manager of Patrick Henry Apartments for four months, but just learned his office is steps from a boundary stone a few weeks ago when a preservation group repainted the fence protecting the stone.

“I wasn’t informed of the stone when I transferred here,” he said. There are 110 apartments — mostly two- and three-bedrooms — in the complex, and Perez estimated about 400 residents live there. “I’d say maybe about 10 people know what it is.”

Perez said when he’s trying to convince prospective residents to rent an apartment, he has never mentioned the boundary stone as a potential draw, although he said he might consider doing that in the future.

Joe D’Emidio’s real estate agent didn’t see a backyard Boundary Stone as a potential attraction more than seven years ago, either. D’Emidio and his wife, Tanya, were looking at a house at 4013 N. Tazewell Street, being shown around the backyard when the agent nonchalantly mentioned that a boundary stone was in the backyard and included in the property. 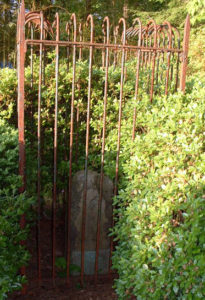 “I almost fell off my feet,” D’Emidio said. “It was all overgrown and barely visible. I tried to contain my excitement, but I told the lady right there that we’ll take the house. She said there was supposed to be an open house that weekend. I said, ‘Look, I want to buy it now, full price and everything.’ She was taken aback. I said I’ll take it now, take it off the open house, so they agree, and I got my boundary stone.”

D’Emidio said once every other weekend, he gets a knock on his door from someone who wants to see the stone. He’s cleared away the brush to display his stone, of which he’s fiercely proud. His wife jokes that they should sell tickets to see it — one group from a Korean church gathered in his background to pray around it, he said — but living near and owning the stone is priceless to D’Emidio. 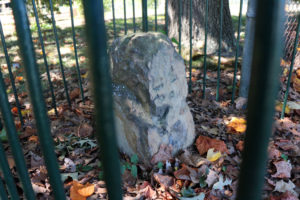 D’Emidio’s three young sons don’t yet grasp the significance of the boundary stone — his is one of the few in its original location — but he has little doubt it will give them as much pride as it does to their father.

“It’s the first monument the federal government spent money on,” he said. “During the Civil War, soldiers at Fort Allen knocked down trees all around here. Then it was a dairy farm, and then they built a house here. It survived all those things.”

Why, then, are they largely unknown, even by those who live a few feet from them? Stephen Powers, the National Capital Boundary Stones Committee Chairman, said it’s because no one has been quite sure what to do with them for more than 200 years. Only one, the boundary stone in Benjamin Banneker Park, is a National Landmark. The others are on the National Register of Historic Places, but receive no federal preservation money.

“They’re orphans,” he said. “They were ignored for 100 years. The owners of the Arlington stones are the people who own the property. Other than the Banneker stone, the other 39 are on the register but nobody takes care of them.”