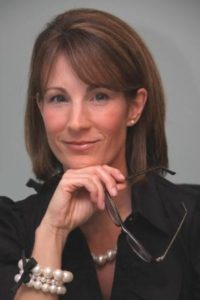 The Rosslyn Business Improvement District has appointed an Arlington businesswoman as its new executive director.

Mary-Claire Burick, a Douglas Park resident, has been named to the top post that the BID. She will lead the BID during the pivotal “Realize Rosslyn” urban planning process, which will help to shape a long-term vision for the community.

Burick, 46, most recently ran a management consulting company. Before that, she spent 20 years managing operations at Rosslyn-based Allbritton Communications, which owns WJLA-TV (ABC 7), NewsChannel 8 and Politico.

Burick replaces Cecilia Cassidy, who retired as executive director earlier this summer after 21 years with the  BID and its predecessor, Rosslyn Renaissance.

In a press release (published in full after the jump), the BID said Burick will lead the organization during “an important time in Rosslyn’s history.”

“We are very fortunate to have Mary-Claire Burick at the helm of the new Rosslyn,” said Peter N. Greenwald, president of the Rosslyn BID and senior advisor for Penzance Companies. “She is a strategic leader who knows how to engage key stakeholders in realizing a vision for change.”

“We are very fortunate to have Mary-Claire Burick at the helm of the new Rosslyn,” said Peter N. Greenwald, President of the Rosslyn BID and Senior Advisor for Penzance Companies. “She is a strategic leader who knows how to engage key stakeholders in realizing a vision for change.”

“This is an obvious fit as Rosslyn takes its place at the vanguard of the region’s technology, media, and business activity,” Mr. Greenwald continued. “Having been part of Rosslyn’s dynamic workforce, Mary-Claire fully appreciates the way we are stepping forward with the events, art, and entertainment that fuel Rosslyn’s young, smart, and creative demographic.”

Commented Ms. Burick: “This is an important time in Rosslyn’s history, and I am excited and inspired to be leading the BID’s role as a catalyst for the new Rosslyn.” The landscape has changed, we are small business friendly, and home to start-ups, media and Fortune 500 companies. We’re a ‘smart’ diverse community with a modern, people-friendly infrastructure that provides easy access to power without the high taxes and crushing regulations. Rosslyn is no longer just an alternative – we’re the first choice whether it’s to lease, buy, build or expand – Rosslyn is ready. We want your business.”

An Arlington resident, Ms. Burick is the BID’s second executive director. She succeeds Cecilia Cassidy, who retired August 30 after 21 years in the role.

Named one of Washington Business Journal’s Women Who Mean Business in 2011, Ms. Burick is certified in Organization Consulting and Change Leadership through Georgetown University. She holds a BA degree in Organizational Communications from University of Delaware.

Through initiatives, services, events, and financial support, the Rosslyn Business Improvement District (BID) works to ensure that Rosslyn flourishes as one of the world’s most successful urban centers. The BID’s efforts benefit businesses, workers, and residents and make Rosslyn an ideal setting for innovation, technology, media, arts, dining, shopping, entertainment, and the enjoyment of dynamic public spaces. The BID, which began operations in 2003, is funded by a special tax paid by property owners in the 17-block commercial office core. For more information, visit www.RosslynVA.org or find the BID on Facebook at facebook.com/RosslynVA or on Twitter at twitter.com/RosslynVA.