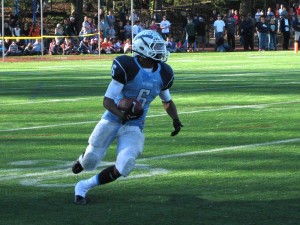 Yorktown beat up on Edison, 44-18, to get back in the win column a week after losing its first regular-season game in years. Senior star running back M.J. Stewart rushed 22 times for 191 yards and three touchdowns, raising his season total to 621 yards in three games. Quarterback Will Roebuck threw just three incomplete passes and ran in a score of his own. The Patriots got past an unexpected speed bump and put their foot on the gas starting National District play. The Patriots will host 3-0 Falls Church Friday night.

Washington-Lee also bounced back from its first loss of the season with a district win, sneaking by Stuart, 15-10. Running back Daquay Harris ran for 202 yards and a touchdown while the Generals defense smothered the Generals’ running backs. The Generals, like the Patriots, are now 2-1 and 1-0 in the National District, and should go 3-1 next week when they visit 0-3 Hayfield.

Wakefield, after an 0-10 2012 season, suffered its first loss of 2013, losing 22-7 to Thomas Jefferson. The loss drops the Warriors to 2-1 after previous wins against Marshall and George Mason. The Warriors’s defense bended to allow Jefferson’s Nathan Kim to run for 270 yards, the third most in the D.C. area, and two touchdowns. Wakefield’s first home game against a National District team will be Friday night against Edison.

Bishop O’Connell thumped WCAC foe Archbishop Carroll, 42-6, in the Knights’ conference opener Saturday afternoon. The Knights moved to 4-1, putting more distance between themselves and their season-opening loss to McDonogh. Quarterback Michael Galvan threw just one incomplete pass while also leading the Knights in rushing with 37 yards and three touchdowns. The Knights next play Saturday at 2:00 p.m. on the road against St. John’s.