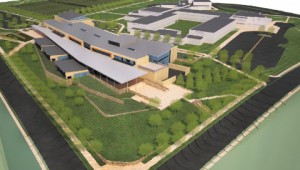 The Arlington County Board unanimously approved the permit to build a $35 million elementary school on the Williamsburg Middle School campus last night (Tuesday).

In a separate vote, the board voted unanimously to delay a decision to install lighting until 2015, when it will form a working group of community members for a full discussion on the potential for lighting the synthetic turf fields.

The lighting on the turf fields was the sticking point for many of the two dozen speakers during Saturday’s board meeting. Several members of the Rock Spring Civic Association spoke against lighting the fields, and condemned the County Board for not following its own procedures in considering the lighting.

“I was always told, follow the process,” Sharon Levin said. “Come to the meetings, there will be county representatives there, everyone will have a chance to give their input, and this is what I did for a year. I attended over 20 meetings and now the county has not upheld their end of the bargain. You guys have changed at the last minute. We never had the discussion about these fields. It was never part of this program. We were told repeatedly that we were not going to have synthetic fields and lighting.”

The board approved the design with synthetic fields, but lights will not be installed on the fields, which members of the School Board and the community said would be more in line with their wishes. County Manager Barbara Donnellan said the decision to introduce the lighting late in the process came from staff hesitancy. 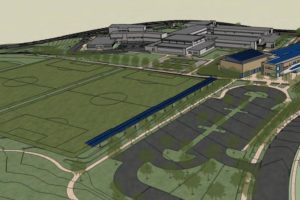 The open space around Williamsburg Middle School, which Rock Spring Civic Association Executive Board member Kevin Scott called “a center of our neighborhood,” will be reduced to make room for the 28-classroom, 96,805-square-foot elementary school.

“We like that open space, we know that’s going to be changed no matter what we do,” Scott said, “but we don’t want that to extend to after dark.”

In the spring, neighbors of the school and members of the Arlington Soccer Association launched dueling petitions regarding the lighting issue, with the ASA in favor of installing lights. ASA members contend that the lights’ impact could be greatly mitigated by shortening the hours they are turned on and installing plant buffers, among other strategies.

“The lighting isn’t a surprise issue… it was always foreseeable that the county could add that as a use permit condition,” said Ronald Molteni, the vice president of the ASA, at Saturday’s meeting. “Field turf is a necessity and…lights should go with it. Our young people need places to have positive outlets for the energy of use, especially during the evening hours.”

The board also approved the reduction of parking spaces required for the school from 258 to 209; a strategy to try to reduce the traffic impacts to the community, but one that wasn’t met with unanimous community support.

“We’ve been told that reducing the number of parking spots is a good thing, but of course it’s pushing cars onto the neighborhood streets, and that’s problematic,” said Lincoln Oliphant, who lives on 36th Street N.

The school, which will be at the corner of N. Harrison and 36th Streets, will serve approximately 630 students. Construction is expected to begin January 2014 and the school is projected to open in time for the 2015-2016 school year.