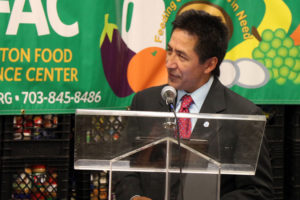 “It is time to change the name,” Tejada said. “Twenty-five years ago, when AFAC started, the Redskins won the Super Bowl. This can and, frankly, should be done. I strongly support that.”

Tejada expanded on his thoughts on the team’s controversial name when reached by ARLnow.com Tuesday. He said it was the first time he’s declared his position publicly, but wanted to stress that it was a personal opinion, not  that of the County Board as a whole.

“I’ve been following the discussions reported in the papers and occasionally on television,” he said. “I have to say, that every time someone is defending the name, they don’t really do a good job. This is separate from the franchise itself. It’s a terrific organization, they have a professional team and everything related to it.”

Several major publications, including the Kansas City Star, Slate Magazine, Philadelphia Daily News and Washington City Paper, have recently decided to stop using the name “Redskins” in print, instead referring to the team simply as “Washington” or “the Washington football team.” Redskins owner Daniel Snyder has been adamant in his defense of the name, telling USA Today “We will never change the name. It’s that simple. NEVER — you can use caps.”

Tejada insisted that changing the name would not be as big of a deal as its defenders believed, citing the late-1990s change from the Washington Bullets to the Washington Wizards when D.C. was going through a particularly high period of gun violence. Then-Wizards owner Abe Pollin voluntarily changed the name.

“Life has gone on. There’s Wizards memorabilia all over the place,” Tejada said. “That would be the case too with a new name. To have a name that is insulting to Native Americans is shameful. What would happen if there was a team named the Whiteskins, the Blackskins or Brownskins? Why are we going there? It’s inappropriate. I’m a big football fan, but I just think that they don’t need this.

“Times have changed,” he continued. “It’s simply time for a fresh name and a fresh start. It’s simply a matter of getting contemporary. I think we could all come up with some names we would like.”