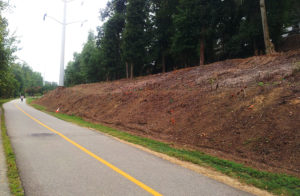 A portion of land along the W&OD Trail near Bon Air Park may look rather rough after having been stripped of plant life over the past few weeks. But it’s actually part of the county’s plan to restore the land.

The embankment that borders N. Arlington Mill Drive had become overrun with invasive species like bush honeysuckle and porcelain berry. In addition to strangling off native plant species on that swath of land, the invasive plants were sending seeds over the trail into the newly restored area near the Ornamental Tree Garden and along Four Mile Run.

“We found that there are pieces of our parks that are pretty derelict. It’s impossible for the native plants to thrive with the invasives strangling them,” said Environmental Landscape Supervisor Patrick Wegeng. “When the invasives take over, it’s almost like putting the park in a straightjacket. They restrict and inhibit, and we don’t get new natives replacing the old ones, and they just die.”

County workers repeatedly had attempted to prune back some of the offending plants, but the invasives rapidly repopulated and spread further. Therefore, workers were joined by dozens of volunteers during a major invasive plant clearing project in August. Some of the vines and trunks were so thick they couldn’t be pulled or chopped, and instead had to be removed with a machine. Workers have been checking back over the past few weeks to eradicate a few pockets of invasive plants that returned.

The next phase of the project involves re-introducing plant species native to Virginia. First, parts of the land will be seeded with grasses. Later in the fall, other open spaces will be filled with native flower species such as black-eyed Susans. The land will be left to rest during the winter and more planting will begin in the spring.

“It’s such a well traveled trail, we really want people to see the beauty of it and the diversity of plant life instead of ragged nature,” said Wegeng. 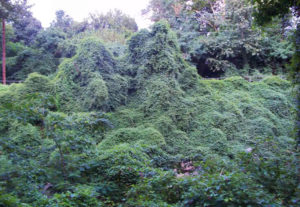 In addition to being more aesthetically pleasing, re-introducing native species is expected to have a positive effect on the park’s ecosystem. For example, milkweed is a major food source for monarch butterflies, but had been largely choked off by invasives along this portion of the trail. Once more milkweed is planted and matures, more monarchs are expected to fly through.

“We want the park to be better, more diverse, richer,” said Wegeng.

One factor currently slowing progress on the restoration is weather. The grasses that will be planted need rain in order to germinate and take hold. Arlington’s recent dry spell means the seeding has to be put off for at least another couple of weeks.

“I would have liked to have had this done, but there’s been no rain and it would have been a waste of money. I still don’t see any rain in the forecast for two weeks,” said Wegeng. “I can’t just put these plants in and hope that they grow.”

Over the past year, more than 200 volunteers have helped with various parts of the restoration along the trail. Volunteers are still needed for the upcoming phases of the restoration, such as planting the native species. Nearly anyone can help, depending on the task, including children. Anyone interested in volunteering can email Patrick Wegeng at [email protected]

“I just can’t say enough about all the volunteers that have joined in. If we can show how this [restoration] can be done, with a lot of the benefits of native plants, it’s going to propel this whole movement forward.”

The section near Bon Air Park is one of the first major restorations of its kind the county has undertaken. If more resources and funding become available, Wegeng would like to see restoration along the W&OD Trail stretch all the way to East Falls Church, where he said the land is “in pretty bad shape.”

“We definitely have a lot on our plate, but we seem to be making headway in some areas. I am determined that this one will be a prototype,” he said. “It speaks well of what can be achieved.”