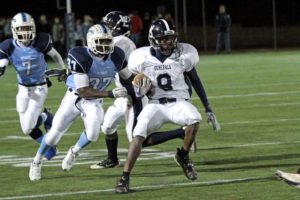 The Washington-Lee and Yorktown High School football teams, after last Friday’s games, are tied for first place in the National District halfway through the season.

Washington-Lee (4-1, 2-0 district) won a statement game Friday night against Falls Church (3-2, 0-2), which had been 3-1 with its only loss coming to Yorktown last week. The Generals won 21-14, holding on after leaping out to a 13-0 lead. Duquay Harris, the running back that’s been leading the Generals this season, scored a touchdown, and quarterback Sam Appel threw for two scores. The Generals have won three straight games and seek their fourth consecutive win this Friday at Mount Vernon.

At the same time, Yorktown was riding its star running back, senior North Carolina commit M.J. Stewart, to its third-straight win. Stewart carried the ball 16 times for 230 yards — a ridiculous 14.4 yards per carry — and four touchdowns to lead the Patriots (4-1, 2-0) to a 42-7 victory over J.E.B. Stuart (0-5, 0-2). The Patriots scored all of their points in the first half, and didn’t allow Stewart to score a point until the fourth quarter, when the game had essentially been decided. Yorktown’s next game will be Friday at home against Hayfield.

After starting the season 2-0, Wakefield (2-3, 0-2) dropped its third consecutive game Friday night, 50-13 against Hayfield (1-4, 1-1). The Warriors fell behind 50-0 before scoring a pair of garbage-time touchdowns in the fourth quarter, one by Andrew Tuttle and another by Chris Robertson. Wakefield will try to get back on the winning track this Friday on the road against Falls Church.

Bishop O’Connell (4-3, 1-2), had perhaps the toughest matchup in the entire D.C. area, going on the road to Hyattsville, Md. to take on No. 1-ranked Dematha. The Knights lost to the Stags (6-1, 3-0), 49-14. The teams were tied at the end of the first quarter and O’Connell had a brief 14-7 lead, but DeMatha, in the end, was simply too much for the Knights, scoring 42 unanswered points to clinch the victory. The Knights will try to snap their two-game losing streak this Saturday at Gonzaga.