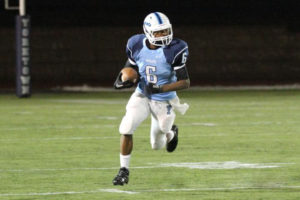 The Yorktown and Washington-Lee High School football teams appear closer than ever to a winner-take-all showdown Nov. 8 for the National District title and a spot in the regional playoffs. The Patriots and the Generals each extended their current winning streaks to four games this weekend, and they each stand at 5-1 and 4-0 in the district.

The Patriots rode their star running back again Friday night, giving senior M.J. Stewart 29 carries, which he took for 198 yards and three touchdowns, including the game-winner in the fourth quarter. The Patriots needed every one of Stewart’s yards in a 19-14 home victory over Hayfield (1-5, 1-2). Through six games, Stewart already has 1,170 rushing yards and 20 touchdowns. The UNC recruit and the Patriots next host Wakefield at 7:30 p.m. Friday.

Washington-Lee had to wait to play because of Friday’s intense downpours, but the Generals collected their fourth straight win Monday against Mount Vernon, 23-21. Mount Vernon had been 2-0 in league play, and the Generals’ victory means they would need to lose twice in the next three weeks to finish worse than second place in the National District. They play Friday night at home against Edison.

Wakefield’s struggles in district play continued Friday with a 37-16 loss to Falls Church. The Warriors dropped to 2-4 on the season, and their last three losses have come to National District opponents. Sixteen points is more than they had scored in any of their previous losses, and they got two touchdowns from Leon Young, but it still wasn’t enough. The schedule only gets more difficult this week when the Patriots visit.

Bishop O’Connell, like Wakefield, finds itself in the midst of a losing streak. The Knights (4-4, 1-3) dropped their third straight game, 31-0, to Gonzaga. The Knights need to rediscover the offensive firepower they showed in the season’s first five games, when they averaged 37 points a game and went 4-1. They will have a week off to refocus and prepare for their game against traditional powerhouse Good Counsel, which is also 4-4, on Oct. 26.