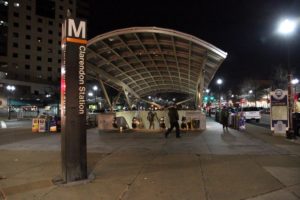 National Public Radio kicked off a nationwide series on commuting Thursday morning with a lengthy profile of Arlington’s transit system on Morning Edition, saying the county “sets the bar for suburban transit.”

Morning Edition host David Greene interviewed former Arlington County Board member Jay Ricks, who was on the Board when it decided to build the Orange and Blue Metro stations underground, spurring the eventual urban development around each station.

Greene, reporting from the Ballston Metro Station, interviewed commuters and Robert Brosnan, the director of the county Department of Community Planning, Housing and Development.

Greene noted that because of the Metro’s appeal, housing prices have skyrocketed — which is forcing out some of the county’s lower-income workers. Additionally, Greene reported, the county’s reliance on Metro means that a train or track malfunction during the commute affects thousands of Arlington residents simultaneously.