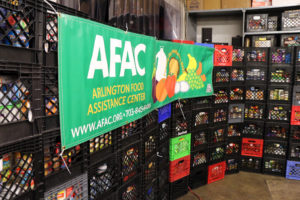 Next week, from Nov. 2 to Nov. 9, Arlington Public Library will donate 10 cents of every dollar paid in fines to the Arlington Food Assistance Center.

This is the first year of the donation program, according to library spokesman Peter Golkin. The money will be coming from the Friends of the Public Library group, not from the fines themselves, which go back into the county budget.

The library brings in thousands of dollars in fines each week, Golkin said, but if residents don’t have a library book or movie overdue, they can still bring food donations to the library for AFAC. These are the items AFAC says it needs most at the moment:

Golkin noted the donation week will start a bit late Saturday. Arlington Central Library will be closed until 3:00 p.m. on Saturday due to a planned power outage as a result of construction on a nearby building. The library will stay open two hours later than normal — until 7:00 p.m. — Saturday evening to compensate. Other libraries will open at normal times, and donations will be collected at all locations.

END_OF_DOCUMENT_TOKEN_TO_BE_REPLACED

More Stories
Rental Report: Is it Better to Have a Roommate?Two Arrested for Bicycle Theft at Va. Square Metro