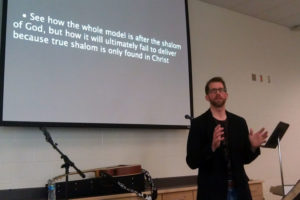 It’s not every day that a new church starts in Arlington, but musician-turned-pastor Scott Maurer of newly formed West City Fellowship has a background even more unique.

Maurer, 46, was raised Jewish, played in a rock band for five years in the mid-Atlantic region and worked in the D.C. tech industry for 10 years before deciding to join the ministry.

West City Fellowship, which is a nondenominational Christian church, held its first official service Sunday morning in a lecture hall at Wakefield High School, where it will continue to hold weekly services at 10:30 a.m.

Raised in Alexandria, Maurer’s father was a “very religious Jew,” but his mother wasn’t observant, so when they divorced, Maurer said he was drifting spiritually. As he grew up, he had a natural curiosity; studying Eastern philosophy and several other Western religions, but shunning Christianity.

“I was extremely hostile to Christianity, very cynical to anyone that claimed to be a Christian,” he said. “I had the idea that you couldn’t be an intellectual and believe any of that nonsense.”

As Maurer got older and entered graduate school, he met a lay pastor and began gravitating more toward Christianity. In his late 20s, after marrying his wife, Julie, Maurer finally “gave his life to Christ.” He said he woke up in the middle of the night and realized he was meant to be a member of the ministry. He trained and was ordained at Fair Oaks Church and moved to South Dakota, where he led a church for four years. A few years after Maurer’s conversion Julie, also Jewish and a one-time groupie of Maurer’s band, converted.

“Not exactly what I signed up for, this Jewish girl, a Pastor’s wife?” she said.

Scott, Julie and their two children moved to Arlington in June and decided to start his own “plant church.”

“This area in general, it’s not a Bible Belt by any means,” Maurer said. “It’s just the opposite. A lot of people share the attitude I had for a long time. Anywhere from a skeptical hostility toward Christ, or more just a neutral, apathetic condescension, with not too much interest. I get it, I really do, I understand where they’re coming from, I understand the hostility.”

“I’ve come to believe,” Maurer continued, “that the really most important question that anyone can ask is, ‘is God real and can I know him? What does he want from me and what can he give me?'”

Maurer and his small congregation have gone around the neighborhoods near Wakefield High School and left flyers on doorsteps and “prayed for the people inside,” he said. He said he plans on writing a blog to draw interest from those skeptical or curious about the church.