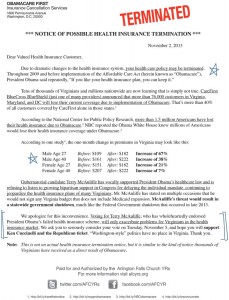 When President Barack Obama stumps for Democratic gubernatorial candidate Terry McAuliffe in Arlington Sunday, young Republicans will be handing out a mock flyer telling people their health insurance has been terminated.

The flyer, which has a red, faux-stamp “TERMINATED” at the top, warns that many Americans have had their policies cancelled or made more expensive after the implementation of the Affordable Care Act. It also reminds potential voters that McAuliffe has supported the healthcare law during his campaign.

Democratic groups dispute some of the claims about health insurance terminations and cost increases.