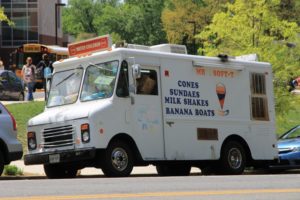 According to a tweet from Yorktown’s School Resource Officer Cpl. Jim Tuomey, “the food trucks will no longer be parked at the school. This is to be in compliance with [Arlington Public Schools] rules & county code.”

In a subsequent tweet, Tuomey wrote, “This was not my call, I like getting a milkshake every now and then…”

APS Spokesman Frank Bellavia said the policy is not the school system’s but a county ordinance, which prevents food trucks from parking within 100 feet of a school.

In an email, Tuomey said he didn’t know who owns or operates the food trucks, but they have parked at or near Yorktown “for many years.”

“They arrive before the first lunch period and leave after the last period of lunch they are here at the school every school day,” Tuomey said. “They have been very helpful in keeping students on campus instead of going off in search of other food options.”

Doug Maheu, the Arlington County Director of the DMV Food Truck Association, said he was not aware of the trucks’ presence near the school, and said he and his membership are careful to follow the county ordinance.

“Being in that area isn’t even part of our business plan,” Maheu, who owns Doug the Food Dude, said.