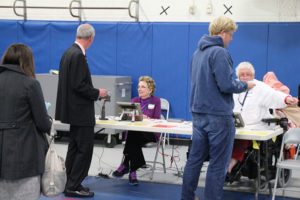 In the Virginia gubernatorial race, Democrat Terry McAuliffe defeated Republican Ken Cuccinelli by a margin of about 56,000 votes. Arlington, meanwhile, contributed about 33,000 surplus Democratic votes to that total.

“We are exporting votes that are desperately needed… throughout Virginia,” he said, lauding the party’s get-out-the-vote efforts, which helped lead to McAuliffe’s 72 percent to 22 percent shellacking over Cuccinelli in Arlington.

O’Leary said the nearly 67,000 votes cast in the governor’s race in Arlington were a record, smashing the previous record of about 57,000 and pointing to an overall upward trend in overall turnout for statewide, congressional and presidential races in Arlington. (Turnout in purely local elections — County Board, etc. — remains flat.) 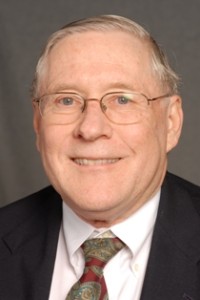 Arlingtonians cast about 7,250 absentee ballots this year, a record for a non-presidential year. The previous record was 7,077, set in 2006. While some of the increase can be attributed to a broader upward trend in absentee voting, O’Leary said the federal government shutdown also played a significant role.

“An interesting thing happened in early October,” O’Leary said. “A whole lot of people were furloughed… and they were mad as hell and weren’t going to talk it any more.”

“My theory that the absentee vote was swollen by angry federal workers, using their unappreciated furlough to come in and vote, may be sustained by the fact that McAuliffe received 79.5% of their vote versus 70.6% in the 52 precincts,” O’Leary said in a subsequent email. “Thus, McAuliffe garnered 650 more votes at the absentee level than might have been expected based on his performance in the precincts.”

The Libertarian candidate running for governor in Virginia, Robert Sarvis, captured about 6.5 percent of the vote statewide, and about 5.8 percent in Arlington. Contrary to the conventional wisdom of some Virginia political watchers, who argued that Sarvis largely siphoned off votes that would have otherwise gone to Cuccinelli, O’Leary said he has reason to believe Sarvis actually hurt McAuliffe in Arlington.

“In my opinion, Mr. Sarvis actually cost our gubernatorial candidates some votes,” he said.