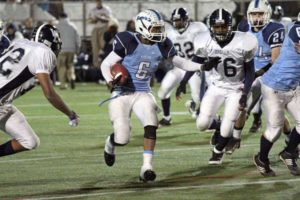 Tonight, at Yorktown High School at 7:30 p.m., will be the biggest football game between Arlington high schools in years.

That may seem like an exaggeration, but Washington-Lee (7-2, 6-0) hasn’t beaten reigning National District champion Yorktown (8-1, 6-0) in their last 30 regular season games. Yorktown has been the dominant football force in Arlington for decades, but this is the Generals’ best squad in years.

Led by quarterback Sam Appel and running back Daquay Harris, the Generals will be forced to keep pace with the best football player Arlington schools have seen in some time in Yorktown running back/defensive back M.J. Stewart. The Generals’ defense has allowed just 19.9 points per game this year, but it will have its hands full.

The game is Yorktown’s senior night, including the senior night for Stewart and his classmates. Yorktown has released a hype video featuring Stewart (below, directed by his classmate Jeremy Cannon) to get students and fans excited for the game. Stewart’s final regular season game as a Patriot figures to be special — he already has 1,387 rushing yards this year and he’s missed a few games with an ankle injury.

Parking is sure to be sparse, so those interested in driving to the game should arrive early. It costs $5 to attend without a season pass.