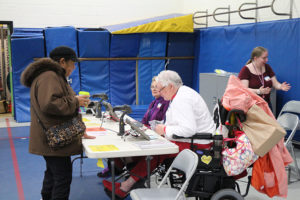 A count of provisional ballots in Arlington is contributing to Democratic state Sen. Mark Herring’s razor-thin lead in the race for Virginia Attorney General.

On Friday evening, Arlington election officials finished sorting through the 161 provisional ballots cast on Election Day, according to Arlington County Registrar Linda Lindberg. Of those, 80 were accepted — 59 for Herring and 21 for Republican state Sen. Mark Obenshain.

(Provisional ballots are cast when a voter cannot produce proper identification or when records indicate that they’ve already voted. The local electoral board then must approve or reject each vote, after further research and after giving those without ID a chance to present it in person by the Friday after election day.)

The 38 vote differential might not seem like much, but it helped to contribute to Herring’s lead, which stood at 163 votes as of last night. The total Attorney General vote tally in Arlington stands at 49,919 for Herring and 16,694 for Obenshain, according to Lindberg.

The Virginia State Board of Elections is expected to certify the election results on Nov. 25. At that time, the losing candidate will be able to petition the courts for a recount — a near certainty. A similar process played out during the 2005 Attorney General race between now-Governor Bob McDonnell (R) and state Sen. Creigh Deeds (D).

Lindberg said she expects a recount to only take a day in Arlington, since the county uses electronic voting machines, as opposed to optical ballots which would each need to be re-run through scanners.