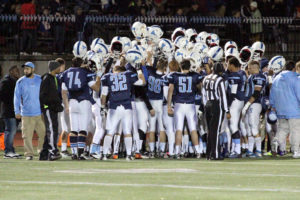 The Yorktown High School football team’s season isn’t over yet. Despite losing in the regular season finale to Washington-Lee, the Patriots bounced back Friday night with a playoff win over Fairfax, 12-7.

Washington-Lee, coming off its first district championship in decades, was Conference 6A North’s fourth seed out of 16, but lost to 13th-seeded Stonewall Jackson at home, 42-34.

Yorktown was without star running back/defensive back M.J. Stewart against Fairfax after the North Carolina-bound senior re-injured his ankle late against the Generals. Fullback Da-Jhaun Short filled in admirably, however, rushing 28 times for 164 yards and a touchdown.

The Patriots started the scoring in the second half when linebacker Sean Coleman intercepted Fairfax quarterback Nick Scott and returned it 41 yards for a touchdown. Short scored the winning touchdown in the fourth quarter after a 12-play drive consisting exclusively of runs by Short.

Stewart told The Washington Post that he will be available to play this coming Friday on the road against undefeated Lake Braddock.

The Generals couldn’t generate the same defensive intensity against Stonewall Jackson as they did when they shut out the Patriots a week prior. The Raiders scored 35 of their points in the second half after the Generals went into halftime with a 17-7 lead.

Generals quarterback Sam Appel, playing in what turned out to be his final game for Washington-Lee, completed 26 of 50 passes for 345 yards and two touchdowns. His top two wide receivers, seniors Trevor McManus and Noah Harrington, finished with 128 and 115 yards, respectively.

The game ended the Generals’ best season in 38 years — the last time they won a district title — but this year’s senior class will have a banner on the gymnasium wall to commemorate their accomplishments.