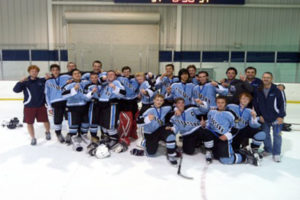 It’s just the second year the Yorktown High School ice hockey club has had a varsity team, but head coach Jeremy Ferrara is already thinking about the playoffs.

“I told the team, we can play JV and finish 9-1 or 10-0, or we can play varsity,” Ferrara said. “You can’t be an elite team without playing the best competition.”

The team took its lumps last year, losing 10-0 to Stone Bridge in Ashburn and 12-3 to Westfield, but that team had no seniors. The same crew stuck around this year and grew. Yorktown went from 19 players to more than 30 in the program, and have enough to field a JV team and several players on the practice squad.

Yorktown’s program was founded in 2003 and played home games in Reston until Kettler Capitals Iceplex was built in Ballston. But one of the most intriguing story lines in the team’s short history is happening this year with four of the players on the JV and practice squads: sophomore Tabitha Wood, senior Riki Langello and juniors Isabelle Wal and Caroline McCune.

“Once you get on the ice, I don’t think the guys see them as any different,” Ferrara said of his female players. He said it’s possible in future seasons they’ll play on the varsity team as players graduate. “It’s a little bit different with the camaraderie because they can’t get dressed in the locker room, but when you get on the ice, it comes down to talent level.”

The varsity team has several players who also compete on local travel teams, and Ferrara has set the expectation of making the playoffs. Yorktown was one win away last year, and if they can get there, Ferrara hopes they can, as he puts it, “make some noise.”

The group seems more up to the challenge this year; in Yorktown’s first game, against Westfield, they won 10-0. They followed that up with a 6-1 win over Bishop O’Connell (Arlington’s only other high school varsity hockey team) last week. Before the season, Ferrara said the number of players in the program has fueled competition, which has made everyone better and his players are confident.

Ferrara will know how good his team really is after this Friday’s game at Kettler Capitals Iceplex against reigning NVSHL champion Briar Woods.

“Friday night will be an interesting test for us,” Ferrara said. “It will either be a wake-up call to me that we’re one of the best teams in the league, or a wake-up call to the kids that they have a long way to go.”