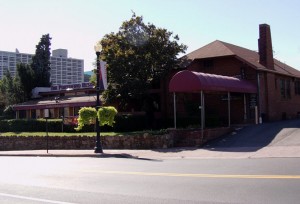 Update at 12:00 p.m. — Portofino has informed ARLnow.com that an inspector gave the all clear, and the restaurant has opened for business.

Firefighters spent part of the morning dealing with a small fire at Portofino restaurant (526 23rd Street S.) in Crystal City.

According to Arlington County Fire Department spokeswoman Lt. Sarah Marchegiani, firefighters found a dryer fire in the basement of the building. They were able to extinguish those flames quickly with a water can fire extinguisher, as well as some flames that had spread to the area behind the dryer. Crews remained on the scene for a while to ventilate the smoke that had seeped throughout the building.

There were some people cooking inside the building when the fire broke out, but nobody was hurt.

Although a fire marshal was still on scene conducting an investigation as of 10:30 a.m., the fire is not expected to affect Portofino’s business and it will be open as usual.