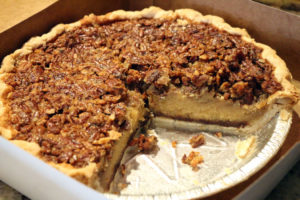 After working in the kitchens of restaurants for 20 years as a pastry chef, Sol Schott had lost why he decided to make a career out of baking in the first place.

Two months ago, after eight years of baking for the five restaurants in Open City‘s restaurant groups, Schott quit and struck out on his own. He started Acme Pie Co. and began selling pies wholesale to local restaurants, as well as taking online orders from customers.

“I’d gotten away from the reason I wanted to be a pastry chef: making food that makes people smile,” Schott told ARLnow.com last week in Twisted Vines, where he rents the kitchen. “At restaurants, you worry about making the numbers, and I got burnt out.”

Before he started baking for high-end restaurants and cafés, in his first job after culinary school, Schott sold cheesecake and biscotti to small cafés and coffee carts around the University of Florida in Gainesville, where he used to live. He used that model to inform his business this time around. 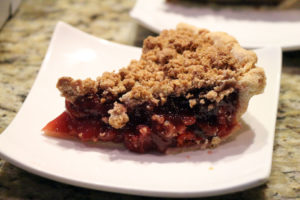 Although he had restaurant industry connections and a reputation from the kitchens in which he worked, he said he tried not to lean on those too much.

“My business plan was to make the best pie I can make, charge enough to make a living,” he said. “I missed being directly involved with customers, and I just didn’t want to work for anybody else anymore.”

Schott arrives at his Columbia Pike workspace at 3:00 a.m. every day and starts baking immediately. The next seven or so hours are spent crafting his seasonal, locally sourced pie recipes. He’ll call his clients at about 11:00 a.m. and start making deliveries at about 1:00 p.m.

The most obvious question to ask of Schott is “why only pies? Why not other desserts or pastries?” 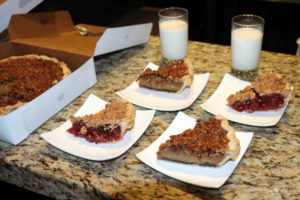 “I wanted to get back to my roots,” he said. His great grandmother taught him to bake and both his grandmothers were bakers. “When you think of pie, I think of home and my childhood… you don’t just eat things with your mouth. It’s an emotional experience. As Americans, pie is our homey food.”

Schott sells to local restaurants like Java Shack (2507 N. Franklin Road), Luna Grill & Diner (4024 Campbell Ave.) and Copperwood Tavern, among other locations. Westover Market carries full pies, as does Stachowski’s in Georgetown. He also ships pies — at a two-pie minimum for each order — and can arrange spots to have customers pick up the pies locally.

Schott has developed his recipes over years of his cooking. For example, The sour cherry pie, he said, has four different types of bonding agents in it, and he makes the streusel differently than a typical streusel recipe, so it doesn’t get soggy.

“It took me a really long time to come with a really good pie dough recipe,” he said, describing a process that involves precisely timed freezing. “You have to be kind of a mad scientist to really make a good pie.” 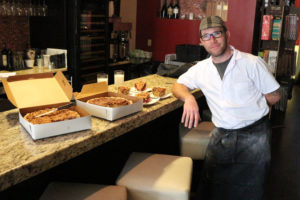 Although the name “Acme” brings back memories of failing contraptions in Looney Tunes cartoons, Schott chose the name for reasons twofold: its definition is “the highest point or stage; one that represents perfection of the thing expressed;” and he said companies in the 1920s and 1930s used to call themselves “Acme” to be placed highest in the phone book. Being called Acme “meant you weren’t fooling around.”

Schott will change his offerings with the season, and promises to continue to innovate in both his recipes — “I’ll change things when I get bored with them,” he says — and in what kind of business he runs.

“All I have is this idea for a pie company,” he said when asked about Acme Pie Co.’s future. “If it seems like there’s going to be a market for a retail shop, I’ll open one. If the direction is hiring a bunch of people and making pies in a factory, I’ll do that.

“I like the plan, I think it’s good one,” he said. He’s received more than 300 orders for pies for Thanksgiving this week. “If the pie thing doesn’t fly, I’ll switch that, too.”