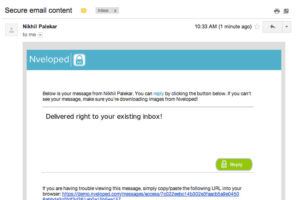 A few years ago, Palekar had to send some files to his doctor, and because email wasn’t secure enough for medical records, Palekar had to send a fax. Living in a one-bedroom apartment as a student in law school, he had no fax machine, but he didn’t see why there wasn’t a way to securely send files — or information — from his Gmail account.

“It seemed like there was a need for the service,” Palekar said. “I didn’t know why there couldn’t be an easy way to send stuff like this over email.”

Palekar had a background in computer science before he decided to attend law school, so he set about thinking of how to create a secure email service. After graduating law school and taking a job as a patent lawyer in Washington, D.C., Palekar started develop prototypes for his eventual product. In 2011, he left his job and started working full-time to launch Nveloped. 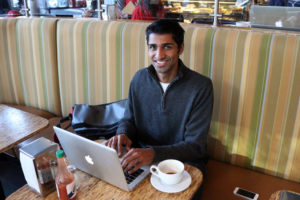 Palekar has a practiced explanation for how Nveloped works. Normal email, he says, gets sent from one address, copied numerous times and delivered to the recipient. With Nveloped, clients instead send email recipients the equivalent of “an empty container.”

Before Palekar built anything, he said he had to look holistically at the problem he was trying to solve.

“It was trying to understand the deficiencies of regular email, which is really coming to light these days,” he said. “The first step was fully understanding why it was broken. The next step was how do you solve this in a way that’s easy for the sender and the receiver. Preserving a pleasant user experience was very important.”

In the summer of 2012, Palekar moved from his Arlington apartment for three months to Seattle to grow Nveloped at TechStars, a technology accelerator that provided Palekar with mentorship and connections that have proven vital.

He’s since moved back to the area, and with the help of people he’s met through TechStars, as well as the D.C. area startup community, Nveloped has raised $400,000 in angel funding and he said he has 10-20 clients. Palekar is the only full-time worker for the company, but he does have part-time and contract help for his growing business. He’s in the process of looking for a coworking office space in Arlington or D.C.

Most of Nveloped’s clients are in healthcare and financial services, and there are also clients with proprietary content — think of a news site that charges for its content — who wouldn’t want its subscribers forwarding email anyone could open without paying.

Despite TechStars’ reputation — it has accelerators in a half-dozen cities around the country — Palekar said finding clients who entrusted him with their email security was a challenge, but perhaps not as difficult as some would expect.

“The early stages are difficult, but there are people who know they need a solution to this problem,” he said. “Part of this process was giving people context for your product and showing them its value.”

Even though Palekar was already in the D.C. area, he said this is the best city in the country for his particular tech startup. His clients are from all over the country, he said, but as he takes on new business it’s likely it comes more from this region.

“D.C. is really growing as a startup community,” he said. “As things develop further, there are going to be areas where D.C. is very strong, and cybersecurity is one of them.”