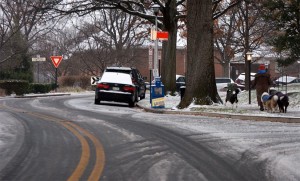 Update at 10:10 a.m. — Washington Boulevard is closed between N. Edison and Dinwiddie Streets due to a downed tree.

Update at 9:30 a.m. — Glebe Road is shut down between Military Road and Chain Bridge Road due to a downed tree.

Update at 9:15 a.m. — The number of Dominion customers without power in Arlington has climbed to nearly 1,700. Meanwhile, Washington Boulevard is closed at Powhatan Street due to a downed tree and live power lines.

Arlington Public Schools are closed today due to icy conditions on the roads.

School administrative offices are open for APS employees, but with a liberal leave policy. Arlington joins Alexandria, Fairfax and Loudoun counties in closing for the day due to the ice storm.

The federal government, meanwhile, is open under a two hour delay. Federal employees also have the option for unscheduled leave or telework.

Arlington County government offices and courts are open, with an unscheduled leave and telework option. ART buses are operating normally, as are Metro buses and Metrorail.

“Please use caution while traveling through the Metrorail system as wet platforms and escalators can be slippery,” said WMATA, in a tweet.

Local roads are reported to be slick, but main arteries have been treated with salt and are simply wet.

“Arlington County roads are passable, but drivers are urged to use caution,” according to an Arlington Alert email.

The ice coating has brought down tree branches, which have in turn knocked down some power lines. As of 7:15 a.m. about 1,100 Dominion customers in Arlington were without power.