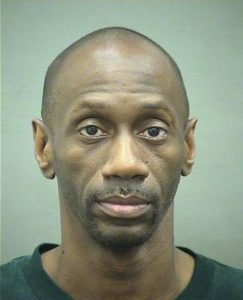 (Updated at 6:20 p.m.) Arlington Sheriff’s deputy Craig Patterson was convicted in Alexandria court today of voluntary manslaughter in the May shooting death of 22-year-old Julian Dawkins.

Patterson was found not guilty of possession of a use of a firearm in commission of a murder. The jury spent more than a day deliberating over the verdict, which was handed down just after 1:00 p.m. Friday. The jury later recommended that Patterson be sentenced to 6 years in prison, according to a tweet from NBC4’s David Culver. A judge will decide on the sentencing in February.

Patterson, 45, was off-duty in May when he shot and killed Dawkins, an Alexandria resident and driver for PBS NewsHour in Shirlington. Patterson claimed the shooting was in self defense, while prosecutors argued he was shooting in rage after an argument.

Patterson was forced to shoot, defense attorney Megan Thomas said in closing arguments, when charged by “an angry, drunk, belligerent man, armed with a deadly weapon.” The knife was found folded in Dawkins’ pocket; Thomas speculated that what Patterson saw was a cellphone.

Assistant Commonwealth’s Attorney Bryan Porter said in closing arguments that if Patterson meant to uphold the law, “the proper thing to do was to call the police . . .but he chose not to.”

Dawkins’ family and friends were in attendance to hear the verdict, and the scene in Alexandria Circuit Court became emotional after it was announced, according to WJLA’s Keff Goldberg.

Mother of Julian Dawkins, Gwen Pratt Miller, on stand at beginning of sentencing phase, sobbing, “he was my only son. He was all I had”.
— Jeff Goldberg (@jgoldbergABC7) December 13, 2013

Patterson has been on unpaid administrative leave since he was charged. Prosecutors were hoping for a first degree murder conviction, but jurors elected to convict Patterson of the lesser charge.