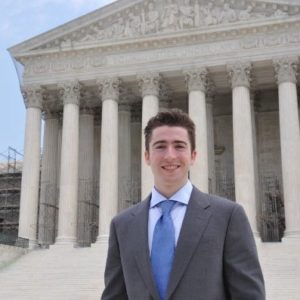 Libertarian Evan Bernick has announced his intention to run for the Arlington County Board seat being vacated by Chris Zimmerman.

Bernick, a legal fellow for the conservative Heritage Foundation, says he wants to reduce spending, cut taxes and require that County Board members be elected by district, rather than at-large.

The date of the special election will be set after Zimmerman formally resigns — which is expected by the end of the month.

In a statement, Bernick said he opposes the Columbia Pike streetcar and the Long Bridge Park aquatics center, and wants to “restore accountability and transparency to our political process and release Arlington’s private sector from the burden of wasteful spending.” The full statement follows.

Arlington is a wealthy, beautiful, inclusive, and diverse community. It’s a great place to live and work, and it has a bright future ahead of it.

The only thing that can hold us back is the poor governance we have seen recently. I’m running for Arlington County Board as a Libertarian Party candidate in order to restore accountability and transparency to our political process and release Arlington’s private sector from the burden of wasteful spending.

I moved to Arlington in 2011 after graduating from the University of Chicago Law School. I’ve spent the last three years at non-profits, researching, writing about, and supporting litigation efforts in defense of, individuals who have been victimized by government overreach. In that short time, I’ve grown to love it here— this is my home.

Like many Arlingtonians, I’m concerned about our government. Over the past year, the Arlington County Board has engaged in jaw-droppingly reckless expenditures, like a million-dollar bus stop, that have been mocked in the national press. To add insult to injury, it has arrogantly brushed aside any and all criticism.

Upon taking office, I will focus spending on core government functions that Arlingtonians depend upon. I will not support any more million-dollar bus stops. I will not support the construction of a $72 million Long Bridge Park aquatic and fitness center. And I will not support a $300 million streetcar in Columbia Pike. The novelty of a streetcar will wear off quickly and its costs will burden private enterprise and divert resources from more pressing governmental priorities for years to come.

But voting against a couple of disasters waiting to happen won’t solve Arlington’s problems. I have three proposals for making our Board more transparent, more accountable, and less burdensome to taxpayers:

1.) Ensure that big-ticket spending items, like the Long Bridge Park facilities, are no longer hidden in generally worded bond referendums.

2.) Require Board members to be directly elected by districts, to ensure that the Board is more responsive to localized concerns.

3.) Scale back property taxes, putting thousands of dollars back in homeowner’s pockets.

If elected, I will bring moderation and fiscal responsibility to a Board that’s in desperate need of both and I will protect each individual’s rights to life, liberty, and the pursuit of happiness.