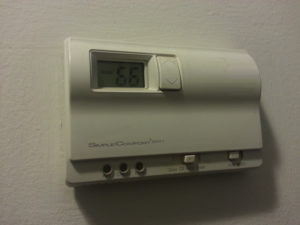 (Updated at 2:55 p.m.) The cold temperatures have a lot of people cranking up the heat, but that’s putting stress on the region’s power grid. Dominion Power is asking customers to reduce any unnecessary use of electricity and alter the hours for major appliance use.

Dominion is one of the power providers in the 13 states and District of Columbia that use the PJM Interconnect power grid. PJM informed all of its clients that the power grid is currently under stress because of the increase in electric heat use due to the frigid temperatures. It’s asking customers to help conserve energy.

“We are asking customers to consider altering their normal pattern of power usage to mitigate the draw that is on the electrical grid right now,” said Dominion Power spokesman Chuck Penn. “We are confident today, as we were yesterday, that we have sufficient power capacity to meet the demand, there are just some steps utilities are asking customers to take to ease the load. We are just responding to the request from PJM Interconnect.”

Customers are asked to avoid using major appliances — such as stoves, dishwashers and clothes dryers — during the peak morning hours of 6:00-9:00 a.m. and the peak evening hours of 3:00-7:00 p.m. Customers are asked to lower their thermostats to between 65 and 70 degrees during the day in order to conserve energy. Dominion has additional energy saving tips on its website.

Arlington’s Emergency Winter Shelter in Courthouse (2049 15th Street N.) opened for around-the-clock services on Monday and will stay open, as a wind chill advisory remains in effect until 6:00 p.m. The shelter has been used by 75 people during the cold snap, and another 10 were provided with cots and blankets in the lobby of the nearby Detention Center. On Tuesday afternoon, DHS made the decision to keep the shelter open continuously on Wednesday as well.

“The good thing about this cold snap is that we had plenty of advance warning so we were able to let people know they needed to get off the streets and come inside,” said Department of Human Services spokesman Kurt Larrick. “A-SPAN did a great job of letting unsheltered homeless people in the community know that it was going to get really, really cold, and that we would have a warm bed for them.”