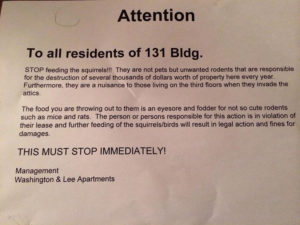 The flyer at the left was recently posted at the Washington & Lee Apartments (2200 2nd Street N.), threatening “legal action and fines” against those who feed the squirrels. Sandra Rose, who has been the apartment property manager for 18 years, stresses she’s not trying to be nasty, but the animals have been causing thousands of dollars worth of damage to the property.

“People think they’re cute and cuddly, and they are. But they don’t always understand they’re a rodent,” Rose said. “As a rodent they do rodent type damage.”

The squirrels recently have chewed holes in roofs on the buildings and residents have complained about the animals getting into their attics. Rose said she has had to hire exterminators to try to capture the animals once they’re loose in the building. 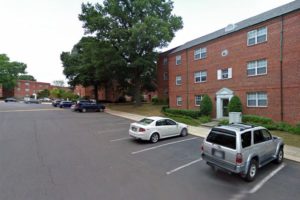 “What we try to do is trap and release. We relocate them,” Rose said. “It’s very expensive but that’s what we do.”

The roof damage isn’t the only problem with the squirrels the property manager has encountered. Rose said in the past, she’s sent out similar flyers when the squirrels managed to get into residents’ car engines and strip spark plug wire material, which they then used to pack their nests.

Rose said one of the exterminators actually spotted residents feeding the animals, which is why she sent out the flyer. She recommends other property owners inform their residents of how destructive the squirrels can be.

“I think they should let tenants know not to feed them because that’s domesticating them,” said Rose. “When they become domesticated they become dependent on you and won’t go away.”

“In a nutshell, with mammals the overall idea is it’s not a good idea to feed them,” Abugattas said. “When you start feeding more unusual wildlife — squirrels, deer, foxes, raccoons — that’s a bad idea. It changes their behavior, and not only will they hang out in places where they shouldn’t, but they lose some of their fear and healthy respect for humans. Wild foods are always healthier for the animals anyway.”

While contracting rabies is a rare occurrence, it could be a possibility if the animals become so domesticated that they approach people, and perhaps bite them. Abugattas said it’s one of the many health concerns stemming from feeding wild animals. Another concern is the the spread of diseases to pets.

A smaller acorn crop in Virginia and West Virginia this fall is prompting squirrels to change their behavior this winter, Abugattas added. As a result, squirrels and other animals have been seeking out non-traditional food sources to make up for the lack of acorns.

“It’s not just squirrels, either,” said Abugattas. “There’s been an increase of turkey sightings and bear in the region. Here, locally, it’s squirrels.”

Despite the shortage, Abugattas said the animals will make do and human handouts barely make a dent in wild animal food intake, anyway. He reiterates that feeding squirrels and other wild mammals could hurt them in the long run.

“It’s not always easy, these animals are often cute and charismatic. But the reality is we should let them do what animals are supposed to do — let them be wild,” said Abugattas. “You may not be doing them a favor by feeding them, you may be getting them in trouble down the line. You don’t want them changing their wild behavior.”