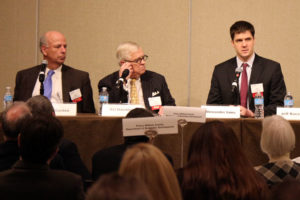 Arlington is “still sorting through the mess” of the BRAC closures that have boosted office vacancy rates, an Arlington representative told hundreds of Northern Virginia commercial real estate developers today.

Arlington, like other communities in the D.C. area, is experiencing weakness in the office market. The high office vacancy rate is exacerbated by new office buildings coming on the market and certain large employers (including military offices impacted by BRAC) leaving.

To combat that, Arlington is considering options providing certain incentives to attract new businesses and hang on to existing employers.

“[BRAC] is still a four-letter word in Arlington for certain,” he said. “We did an aggressive plan for Crystal City, we’ve done planning along Columbia Pike. We have done planning for BRAC in Rosslyn as well, so we’re not only doing planning for the future, but now we’re aggressively positioning ourselves to hold on to what we have.”

Iams was one-fifth of a panel with the directors of economic development from Alexandria as well as Fairfax, Loudoun and Prince William counties. He told ARLnow.com that Arlington is considering tax incentives and other methods to try to encourage businesses to grow — and, just as importantly, stay — in Arlington.

“We’re trying to structure a policy on how to address office vacancy,” he said. “We haven’t done it yet, but you can expect to see it at the end of the season.” 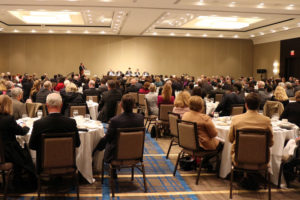 With the delivery of the 35-story 1812 N. Moore Street last fall, Iams said Arlington’s office vacancy rate is now hovering around 20 percent, the highest it’s been in nearly a decade. Iams said projects like Monday Properties’ skyscraper, which is still unoccupied after being built “on spec” are “suffering the most, because it’s so much space all at once.”

Iams pointed to the success at 1776 Wilson Blvd, a five-story office building at the intersection of N. Quinn Street. It opened in winter of 2012 and is about 85 percent leased, he said.

What Arlington can do to solve its vacancy rate, Iams said, is to follow Vornado’s example in Crystal City when the first wave of BRAC closures saw the U.S. Patent and Trademark Office move to Alexandria.

“Vornado didn’t just sit on their hands,” Iams said. “There was an adaptation with rents and an increase in amenities nearby, and they transformed Crystal Drive into a retail center.”

Iams also cited Kettler Capitals Iceplex, Penrose Square and the Village at Shirlington as examples of “placemaking” the county has partnered with private businesses on to make specific areas more attractive to employees and residents.

The other economic development leaders lamented the lack of demand for office space while demand for residential units all over Northern Virginia is exploding, creating a tricky regulatory line to walk to ensure balance. Iams said Arlington, despite its vacancy rate, still sees demand for office development.

“We’re getting questions from our board and our community about approving more office space,” he said. “The office market also works in cycles, and we want different kinds of products available to be able to deploy when a certain company or tenant may be searching in our market.”