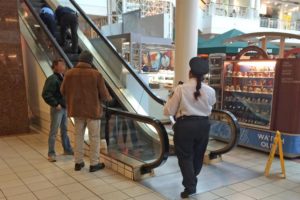 A man was taken to the hospital after tumbling down a lower level escalator at Pentagon City mall this afternoon.

The incident happened around noon. According to witnesses, the man might have suffered a seizure before falling half-way down the escalator near the Haagen Dazs store. He suffered what appeared to be a broken leg and was quickly tended to by security personnel and paramedics.

Mall maintenance workers could be seen cleaning blood off the escalator after the man was transported to the hospital. Witnesses say the man was part of a large group of pro-life activists that were shopping and eating at the mall.