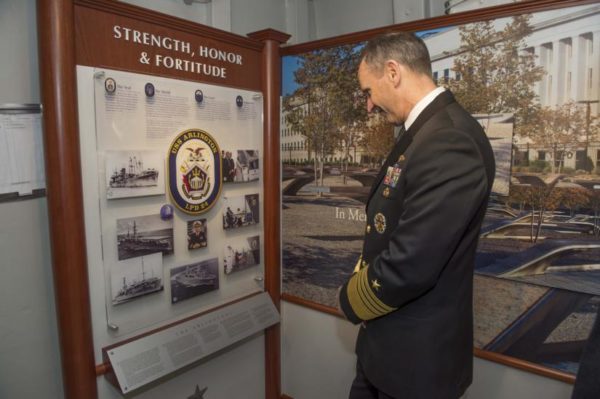 The USS Arlington, which was commissioned last year in Norfolk, has opened a tribute room in honor of the victims of the Sept. 11 terrorist attacks.

The room was funded in part by donations from Arlington County and local residents and organizations. It includes a quilt with the names of the 184 victims of the attack on the Pentagon, sewn by 8th grade students at Arlington’s Thomas Jefferson Middle School.

A ribbon-cutting ceremony for the tribute room was held late last week.

The tribute room, which honors the 184 heroes and victims killed in the terrorist attack on the Pentagon Sept. 11, 2001, was funded by donations from private individuals, civic organizations and corporate sponsors to the Hampton Roads Navy League.

The new room is located just aft of the bridge on the ship’s fourth level.

“It’s a solemn place with many images from that day in 2001,” said Greenert. “But it also helps us to remember what this ship is all about.”

In the morning of Sept. 11, 2001, five hijackers aboard American Airlines Flight 77 crashed the airplane into the west wall of the Pentagon, in Arlington County, Va. Similar terrorist attacks occurred in New York City and Somerset County, Pa.

Arlington is the second of the Navy’s three amphibious transport dock ships named in commemoration of the worst incident of terrorism in U.S. history.

“Arlington is a multi-mission ship, combining expeditionary and amphibious operations, and is a very high-demand asset with a very bright future – it’s all just a matter of how much we can give of her at any time,” Greenert said.

The tribute room’s mahogany display cases and commercial-grade flooring were built for design capability and durability, ensuring it will inspire generations of Sailors and Marines serving aboard USS Arlington for the 40-year projected lifespan of the ship.

The focus of the room is a quilt with the 184 names on it that was sewn by eighth grade students from the Thomas Jefferson Middle School, in Arlington, Va., then hand-assembled by artist Dianne Braden Lumpkin. Other artifacts include a section of an I-beam and remnants from the Pentagon.

Prior to the ribbon-cutting ceremony, Greenert and Arlington Commanding Officer Cmdr. Darren Nelson addressed the ship’s crew, members of the Navy League and 9/11 Pentagon first responders.

“We open this room today to show our Sailors our heritage and to help them understand how Arlington got her name,” Nelson said. “We can never forget that terrible day, but we need to teach our Sailors that our nation, our Navy and our ship are forever resilient. We will always stand up against terror and terrorism. We have the strength, honor and fortitude to continue the fight as long as it takes.”

Arlington is the eighth in Navy’s San Antonio class of ships, designed to be the most survivable amphibious vessels ever put to sea. The third in the U.S. fleet to bear the name, Arlington was commissioned April 6, 2013. The ship combines 21st century amphibious shipbuilding and warfighting technologies to support current and future Marine Corps aircraft and landing craft, and will be capable of taking nearly 1,200 Sailors and Marines into harm’s way.