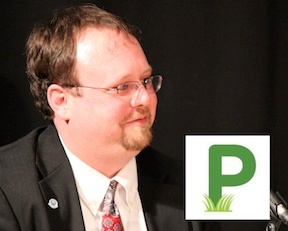 Jason Spencer, the editor of the Arlington, McLean and Clarendon-Courthouse-Rosslyn Patch websites, has been laid off, effective today.

Spencer, who started at Clarendon Patch in May 2011 before taking over Arlington and McLean as Patch began losing staff, is a casualty of Patch’s mass layoffs, which were announced today. The 900-site hyperlocal news network is restructuring under new owners Hale Global, which is in the process of acquiring majority control of the business from Aol.

The Patch sites Spencer had helmed will still be operational, but its unclear at this point who will be running the site and how the site will cover local news, if at all.

“Today will be my last day at Patch,” Spencer wrote on Arlington Patch’s Facebook page. “For those of you I’ve worked with over the past (almost) three years, it’s been a pleasure. Arlington has been a great place to get to know and to cover — it certainly was a social and political 180 from the community I had previously covered in South Carolina! And thanks to the readers who have kept us going.”

The editor of the Alexandria and Del Ray Patch sites, Drew Hansen, was also let go today. Media watchdog Jim Romenesko reports that somewhere between two-thirds and 90 percent of Patch editors across the country were let go today.