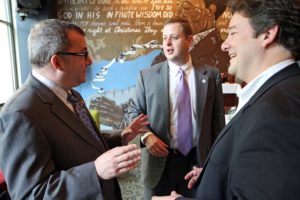 State Sen. Adam Ebbin says he intends to run for the congressional seat of the retiring Rep. Jim Moran.

State Senator Adam Ebbin (D-Alexandria) announced today that he would seek election to the U.S. House seat of retiring Congressman Jim Moran (D-8). Ebbin has filed the paperwork needed to launch his campaign committee for the June 10 Democratic Primary.

“For twenty-three years, Jim Moran has stood for the progressive values of the people of Northern Virginia. I am proud to have been represented by him in Congress, and to have represented him in Richmond,” Ebbin said.

“Today, I am excited to announce that I will be running to succeed Congressman Moran,” said Senator Ebbin. “For over a decade in Richmond, I’ve been a strong voice for progressive values who’s gotten results. I’ve fought to end human trafficking, to strengthen protections for seniors and the disabled, to ensure LGBT equality and to expand Medicaid in Virginia.”

During his time in Richmond, Ebbin has been recognized as a proven progressive leader by the Virginia League of Conservation Voters, Equality Virginia, the Virginia AFL-CIO, NARAL Pro-Choice Virginia, and other key progressive organizations. In 2011, Ebbin authored a bill to reign in the abuses of then-Attorney General Ken Cuccinelli.

“Now, more than ever, we need effective leaders in Congress who know how to reach across the aisle to accomplish important goals while never abandoning our shared progressive values. In Congress, I will work with President Obama to protect the Affordable Care Act and ensure access to quality health care. I will protect federal workers from mean-spirited attacks. I will work alongside representatives from every state and political party to raise the minimum wage, fight climate change, and ensure that we never abandon the promise of Social Security and Medicare,” Ebbin said.

Prior to serving in the General Assembly, Ebbin served as Governor Mark Warner’s Chief Deputy Commissioner of the Department of Labor and Industry. He has lived in Alexandria for more than 20 years, and served on the 8th District Democratic Committee and the Virginia Democratic Party’s State Steering Committee.