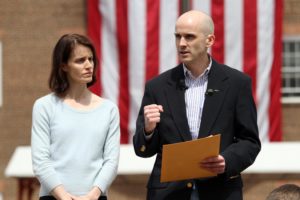 Shuttleworth, who unsuccessfully challenged Rep. Jim Moran (D-Va.) in the 2012 Democratic primary, announced tonight that he’s running in this year’s sure-to-be crowded Democratic primary. The announcement follows the news Wednesday morning that the 12-term Congressman is not running for reelection.

Shuttleworth, a 48-year-old Navy veteran, has declared himself a “diversity candidate” and said in a statement that he is “a fighter pilot and a feminist.”

“I don’t think that women have been treated equally throughout history,” he told ARLnow.com. “I think we’d be in much better position if we did treat women more equally and if more women were in positions of power.”

“I’m completely for equal rights in all things, no one is more pro-choice than I am,” he said, adding that he would fight for equal pay for women if elected to Congress.

On issues like sexual assault in the military, Shuttleworth said “it’s going to be the men who have to take a decisive, bold leadership role in making sure people know it’s not okay to mistreat any minority, most especially women.”

“I will be the loudest voice in the land for equal rights for all minorities to include our transgender brothers and sisters,” he said in the statement. “I cannot be more committed to being anti-bullying.”

Shuttleworth said he himself was bullied while a student leader at the Naval Academy. The bullying stemmed from a time at when he reported classmates having a drinking party in a room next door, a serious offense at the school. After that, Shuttleworth said, he was “threatened with bodily harm,” broken light bulbs were placed in his bed and his car was vandalized. The bullying  followed him “for years,” even while in naval service, but Shuttleworth said he would do it all over again because it was the right thing to do.

“[I] take ethics and integrity incredibly seriously, and that’s the same kind of integrity i’m going to bring to the United States Congress,” he said, later calling Congress “an institution that has failed America.”

The full statement from Shuttleworth, after the jump.

As a straight white married father, it may come as a surprise that I am considered a diversity candidate.

I’m a Fighter Pilot and a Feminist and I believe that it is the behavior of men more than women that will determine the quickest path to equal rights.

I’m a Naval Academy and West Point graduate who knows what it is like to be bullied. I have roomed with at least two gay midshipmen and I will be the loudest voice in the land for equal rights for all minorities to include our transgender brothers and sisters who remain outside a proper embrace. “Don’t ask, don’t tell” was a dishonest disgrace for which our national security, and our emphasis for honesty, suffered. And, of course, there is no defense for the Defense of Marriage Act.

I’m a Harvard Business School Graduate who thinks that greed is not good and that effective government oversight is a critical check to Wall Street and Big Business that too often prioritizes the short-term and puts profits above ethics when they must go together.

I have served to defend not just Americans, but also those who aspire to be Americans and I think the least we can do is pass the Dream Act. The best we can do is put policies in place that will enable us to “tear down that wall”. An expensive and oftentimes ineffective barrier between two countries at peace with each other has costs that can’t be quantified in dollars and cents alone.

I have flown over the world’s most hostile terrain with some of our country’s deadliest weapons, and I am convinced I was safer there than I would be on the ground of too many of our gun-laden streets of America. Clearly, we are not “well-regulated” enough.

I owe my life to the unequaled professionalism and investment in our Armed Forces – 1,700 hours flying with bombs, bullets and jet fuel make me incredibly thankful for the quality of our military contractors, servicemen and women. Yet I am acutely aware of the limitations of the influence of our Armed Forces. The truth is we are much better at breaking than making things. I am certain that our “life, liberty and pursuit of happiness” can be stronger with a marked shift in priorities.

Some math. On 9/11, nearly 3,000 Americans died from terrorists. On every day of every year, nearly 7 times that many die worldwide from an equally terrifying but much more pervasive threat. For so many families, their greatest fear is waiting for their doctor to read their loved one’s CT scan.

Both of my amazing parents died of lung cancer, both non-smokers. I have not suffered alone. I am just one of the hundreds of millions of people alive today who loved somebody who died too young in what will forever seem a recent yesterday.

Quite selfishly, I plainly see a clean environment as a matter of life and death.

Yet too many in Congress embrace, and fund, an atmosphere of never-ending national security crisis. We spend about 150 times more on Defense, Homeland Security, and the “black budget” than we do on research to cure cancer. Yet we are thousands of times more likely to die of cancer than to terrorists. This must change. I call for a new kind of space race – one of greater importance, to cure cancer and other diseases.
We need to save our people. We need to inspire the world – and invite them to help. We need to commit to cure cancer and so many other dreadful afflictions that can be within our reach. This is a pursuit that requires the power and the prestige of the greatest nation on earth. This is about creating the most meaningful jobs on Earth – many of them well-suited to Northern Virginia. This is about a clean and safe environment. This is about education with a noble purpose. This is about your loved ones never having to fear the terror within.
Cancer, and so many other pernicious diseases, someday, will be cured. Whether that day is close or far will be up to us.

Especially with that day in mind, I declare my candidacy for Congress in Virginia’s 8th Congressional District.”

Shuttleworth is a former strategy management consultant and marketing executive with MicroStrategy and Blackboard. He is a community activist currently in the following leadership positions for the following national, regional and local organizations: the Executive Board of Give An Hour; the Executive Committee of Team Kids; the Arlington Public Schools School Health Advisory Board; the Board of Arlington Gay & Lesbian Association and is the President of his Community Association.

He has lived in Arlington, Virginia for 14 years with his wife Divonne and their twin boys Reece and Bowen.

Shuttleworth’s 2012 campaign was almost scuttled when an error led officials to falsely believe that Shuttleworth’s campaign had not submitted enough signatures to get on the primary ballot. That led to an angry rebuke from Shuttleworth, who alleged “pathetic, smoke-filled backroom, Tammany Hall corruption” among election officials. He was eventually allowed on the ballot but lost to Moran 74 percent to 26 percent.

Shuttleworth, who is the first candidate to publicly announce for the race, says he’s not overly concerned that the other potential candidates’ experience in public office will give them a leg up. He said he has been active in the community since his 2012 race and has increased his name recognition with voters.

He added that he has the “most diverse background out there, and quite frankly the most depth of experience in areas that are very important to the district.”