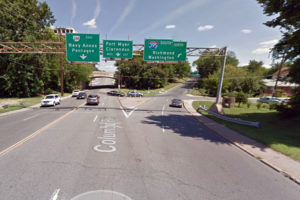 (Updated at 11:40 a.m.) Starting today, drivers heading eastbound on Columbia Pike toward I-395 will be following a new traffic pattern.

Drivers heading toward northbound I-395 will now turn left at the traffic signal on S. Quinn Street and bear right to merge onto the interstate, according to the Virginia Department of Transportation. Those going south will drive through the intersection with S. Quinn Street and use the ramp on the right.

That’s a change from before, when northbound and southbound traffic could both take the ramp. VDOT workers will be on the road today making the switch, which is expected to be complete by 5:00 p.m.

VDOT also announced that Columbia Pike will be closed to drivers between S. Queen Street and Orme Street each of the next three weekends as workers demolish the old Washington Blvd overpass. The closure will begin at 9:00 p.m. tomorrow night until 4:30 a.m. Monday, Feb. 3, and it will be closed again at the same times Feb. 7-10 and Feb. 14-17.

The demolition is the next phase in the $51.5 million Washington Blvd improvement project, still slated to be finished in the summer of 2015.

Read more →
More Stories
Air Force Plans to Move Research Office Out of BallstonPeter Fallon: Why You Should Vote for Me