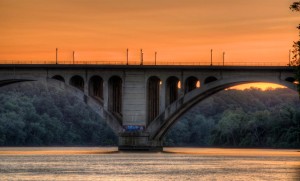 A man fell from the Key Bridge into the icy Potomac River over the weekend and lived to tell the tale.

Arlington first responders got a call for a man who fell or jumped from the bridge around 11:30 a.m. on Sunday. Fire department personnel determined that the man was on the D.C. side of the river and responded to the Key Bridge Boathouse.

There, they found that a civilian had seen the man in the water and used a kayak to bring him to shore, according to Arlington County Fire Department spokeswoman Lt. Sarah-Maria Marchegiani.

The 32-year-old man was transported to George Washington University Hospital for “minor injuries.” Marchegiani could not say whether the man’s plunge into the Potomac was deliberate or accidental.