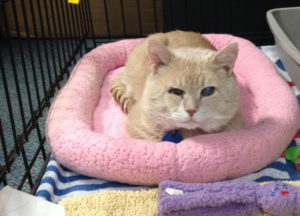 The Animal Welfare League of Arlington is helping a cat recover from injuries suffered as a result of being shot numerous times with a BB gun.

An Arlington resident recently found the cat near Ballston Common Mall and brought it to the AWLA shelter, according to the league’s email newsletter. The cat, a male tabby, had a blind right eye and an injured left eye — likely the result of being shot with more than 30 BB pellets.

“We named him Arrow and sent him out for x-rays,” according to the league. “We were shocked to learn that he had at least 20 BB pellets in his head alone. This is most likely the reason for his blindness. Although it was shocking to see so many BBs in one animal, there was no medical reason to remove them, as it would cause more trauma.”

“We were able to do thorough diagnostic work on Arrow,” the newsletter continued. “We also neutered him, removed his badly damaged right eye, and performed a dental cleaning with extractions. This sweet boy is now recovering in our offices being closely watched by our medical team. We are hoping for his full recovery and eventual adoption!”

Arrow was originally found on Jan. 18. It appears that the cat’s wounding was an isolated incident.

“We have not seen any other animals with BB pellets,” AWLA Chief Operating Officer Susan Sherman told ARLnow.com. “This is something that could have happened some time ago.”

“Everyone here is impressed with Arrow’s will to survive and thrive,” Sherman added.