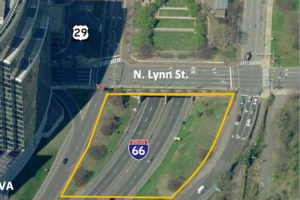 The Arlington County Board could approve a study into the sale of air rights over I-66 to private developers this weekend.

The state Office of Transportation Public-Private Partnerships (OTP3) announced in July that it was reaching out to developers to gauge interest in leasing VDOT’s air space over I-66, east of N. Lynn Street in Rosslyn, and over the East Falls Church Metro station.

According to county staff, private developers have expressed enough interest that the county wants to further study the plan. An initial study will be rolled into an amended contract with a planning and preservation firm that is already working on the Realize Rosslyn sector plan update. Depending on the outcome of the initial study, the county could fund more study in the future before a decision is reached to lease the air rights.

The previous contract with the firm had been for $493,544, and the County Board is likely to approve an additional $290,706 for not only assisting county staff with the air rights study, but also for an increased role in Realize Rosslyn.

Realize Rosslyn, a planned update to the Rosslyn Sector Plan, has been in the planning stages since 2011. A Board-appointed panel has been charged with sorting through the community concerns and developing the framework for the future direction of Rosslyn development. The panel was initially supposed to meet six times annually, but it has increased its scope of work and has met closer to 22 times annually.

A framework of the sector plan is expected to go before the Board this April, and county staff hope a full new Rosslyn Sector Plan will be complete by November.