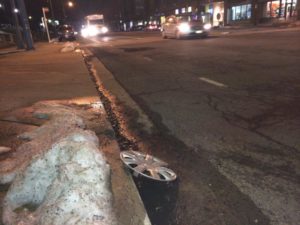 A third of Arlington’s roads are ripe for rapid potholes, according to a study conducted by county staff.

Those roads fall below 60 percent on the Pavement Condition Index scale, which is an indicator that those roads are susceptible to “more rapidly” developing potholes. On average, Arlington’s roads sit at 69.8 percent, according to county Water, Sewer and Streets Bureau Chief Harry Wang.

Wang cautioned against categorizing Arlington’s roads as above-average or below-average nationally. But he said Arlington’s recent resident survey that cited road conditions as a main concern was evidence that the county should not be satisfied.

“That means that 70 percent [PCI] is not good enough,” Wang told the Arlington County Board yesterday. “There are many lane miles and surface areas that need great attention.”

The county plans to pave 72 miles of roads this year, a jump from 49 miles each of the last two years. County Manager Barbara Donnellan said they plan to increase that number next year — and discuss road conditions in more detail — during Capital Improvement Program discussions.

Wang said county streets maintenance staff is currently driving on main and arterial roads replacing potholes. About 80 percent of the county’s main roads have had their potholes repaired, he said, and the rest should be completed by the end of this week.

“We’re not waiting for complaints to come in,” he said. “We just drive zone by zone and see whatever needs to be fixed.”

Wang also said that between Jan. 8 and Feb. 20, the county has had to perform 89 repairs on water mains, and average of 2.1 breaks per day. The average age of the county’s water mains is 55 years, and he said 90 percent of the mains that have broken or cracked are older than 55 years.